One of the wargaming ideas that inspired me to blog were the various civil unrest projects set in the UK out there. I’ve always been a big an of alternate history ideas and gaming civil war or something very close to it opens up the possibilities of more to a standard evenings game than army ‘A’ lines up to fight army ‘B’, I’m imagining something very close to an insurgency but with more of a civilian feel to it. I’ll have a think about my own background- I’m tempted to develop it in 2 periods- the classic grim 80s and something set the year after next that allows me to explore more modern concerns.

When I read the Force on force main rule book (published through Osprey http://www.ospreypublishing.com/ ) I was very impressed with the way the rules handled mobs of civies. My original idea was to have an insurgent group using the cover of a riot to attack a target. The security forces player would have to deal with threats on 2 levels- crowd control and counter insurgency. For pure Riot control games I found a set of rules from Jim Wallman ‘Civil Disorder’ that should do nicely ( http://www.jimwallman.org.uk/wargame/index.htm ).

To this end at the Sheffield Triples show I bought a selection of riot figures from both Irregular ( http://www.irregularminiatures.co.uk/ ) and Stonewall (http://www.stonewallfigures.co.uk ) as well as some Riot policemen. I also got some sabot style bases to mount them on. When there are painted I’ll put some pics up.

RH models ( http://www.rhmodels.com/ ) does a nice range of armed civies including some new releases with British style weapons- I’ve got some already but I’ll be adding to my collection soon. The Hobby Den ( http://www.thehobbyden.com/ ) over in Ireland has just released a Shorland Armoured Car, it saw service in Northern Ireland, I’ll pick on up to beef up the options available to the Security Forces player.

Scenery was proving to be the biggest headache for me- all my Urban stuff is pretty heavily ruined which isn’t really suitable (unless I come up with a very apocalyptic backstory). However the excellent Winter of ’79 blog ( http://winterof79.blogspot.com/ ) provided the solution- a range of affordable Card Models ( http://cardmodels.web.officelive.com/default.aspx ). A quick poke around the net revealed other free models, normally aimed at Railway modellers that will be suitable. Filling my 6′ by 4′ table won’t be too expensive after all.

On the subject of blogs there are 2 others that have provided a lot of inspiration: England Prevails ( http://englandprevials.blogspot.com/ ) and Un- Tied Kingdom (http://untiedkingdom2011.blogspot.com/ ).

I’ve finally got round to uploading some picture from my phone to my PC. Amongst them were a couple of shot I took of the Operation Goodwood Megagame I played the other month. For more details see here: http://www.megagame-makers.org.uk/

My role was as part of 272nd Infantry Division, we took our historical role defending Caen. We took heavy causalities but in the end held on to the town a day longer than in real life- mostly due to Corps command being more than generous with allocating support (elements from Das Reich SSPz Division and a lot of Nerbelwerfers). I really enjoyed the megagame concept- best explained as a double blind boardgame mixed with a free kreigspiel.

Apologies for the flash- my photography skills with a cameraphone and laminated maps don’t mix.

In other news: Ambush Alley’s Cold War Hot and Ambush Alley scenario supplements arrived today. Had a quick flick through them- am impressed so far. Hopefully they’ll give me the impetus to sort out my Vietnam and Cold War projects into some sort of order.

All three are Airfix kits painted with a cheap silver aerosol paint I got from Wilkinsons, over a black undercoat. 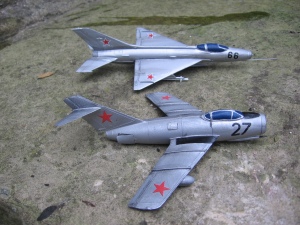 For my regular Monday night game I put on another game of Kampfgruppe Normandy. Bill (UFM) and I took the British side against Evan’s Germans. I’m not so keen on points based games (and I’m the only one with a copy of the rule book) so I created a scenario- it was fictional but hopefully representative. The British had to break into a fortified village controlled by the Germans which was protected by a stream. The River was impassable to all troops and as the bridge was barricaded only infantry could use it. As I had planned for 2 players on the British side in a platoon level game- 1 armour (Bill), 1 infantry (me) rather than have D6 command points split between the two forces I decided to try D3 each.

The full briefings for each side are below.

Date: June 1944.
Location: Normandy.
Situation: The Germans have fortified a village blocking the line of advance in this sector. They need to be pushed back and cleared from the buildings.
Victory Conditions: Clear the village.
Initial deployment: Up to 8” in on your two board edges.
Special Rules: The two bridges have been barricaded and are therefore impassable to vehicles but not to infantry.

Date: June 1944.
Location: Normandy.
Situation: The tactic of fortifying villages to hold up the allied is working well. Defend this village to slow their advance.
Victory Conditions: Hold the village.
Initial deployment: Set up anywhere behind the river.
Special Rules: The 2 bridges have been barricaded to stop all vehicle traffic but not infantry. Nominate one building to provide reinforced cover. Crew served weapons may be dug in. Reinforcements arrive on turn 3- place them on your board edge.

The game started with a rush of the British infantry to clear on bridge whilst the armour stayed back. The MG42s did their job of suppressing the infantry well, given the low number of command points I had I struggled to make much headway only reaching the foot of the bridge. When my Vickers mounted on a Bren shot away a couple of teams it made things easier. Again the lack of points I had meant I made little use of any off table assets – that and my Platoon HQ spending most of the game stuck in a wood. Bill’s Churchills spent most of the game battling the PAK 38- it had little chance to brew them up but remained a threat all game till dispatched on the last turn with a well aimed shot. The STUGIII came on but fell quickly to the 6pdr armed Churchill. Ultimately the Brits pushed the Germans beyond their breaking point with a slow attrition rather than with an fast advances. Not the most rewarding of wins to be fair- especially as Bill’s new Ark didn’t get to deploy

Changes for next time: Swap STUGIIIF for G as the F wasn’t in Normandy. Go back to D6 for the British command roll and let the players fight it out amongst themselves. Add more fortified buildings for the German player which should increase the length of the game.

Just finished painting these two fireteams up. they are 20mm figures from Under Fire Miniatures (http://www.underfireminiatures.com/index.htm).

As usual I speed painted them- probably not done all the fine detail justice but they’ll do for the table top when I get them in a game of Force on Force.

A year or so ago I got a esubscription to the Wargames Developments journal The Nugget. The new issue is up to download now. Had a quick skim through it- I’m particularly taken with the sub game. May try to run a version of it myself. Still got the Coldfeet and Indonesian games to sort out as I’m intending to run them at some stage. The Coldfeet one is all set tbh- just need to find the time to run it.

As stated I’ve set up my blog to try and get my projects in order. They’ve grown quiet organically over the years and have got slightly out of hand…. Over the years I’ve kept a list of all the figures I’ve got (fortunately I started when my collection was pretty small) as an aide to writing scenarios; this was when I moved from playing Rapid Fire to skirmish level games. Additionally I’ve managed to keep almost everything in 20mm/ 1:76/72 scale. That way I can get the most use out of the scenery I’ve amassed.

Rapid Fire was the rule set that got me back into play historicals after years of GW games and dabbling in Napoleonics. It’s a decent system but it plays better the bigger the game you have. As I’ve never got the chance to have a table bigger the 6 foot by 4 it turned out not to be the best system for my needs, hence me moving to more skirmish based games: first Crossfire, then Red Poppy White Feather, then Arc of Fire now we seem to be giving Nuts a try.

One of the early decisions I made was to concentrate on the Eastern front- I figured it would give me more gaming options than any other theater: you can get infantry, armour, amphibious, winter, urban and partisan etc actions all with one set of figures. over time this has been expanded to include some of the minor nations too. However I couldn’t leave it there- so I started to look at the Italian theater too, some late war Brits and Americans to go with that. The late war stuff I’ve got plus the Russian vehicles and guns will also work for Korea so recently that’s been an area I’ve been looking into. Talking of Korea I’ve got a modest collection of 1/600th aircraft.

Vietnam films have always been a big favourite of mine So I’ve got a modest collection. I’ll be using the new Force on Force rules to game that.

My modern collection is quite disparate- plenty of stuff for Chechnya, bits for the cold war, lots of stuff for Afghanistan (1979- present really). Modern gaming really seems to be growing at the moment lots of new companies are releasing ranges for it – most seems to be based around the aforementioned FOF rules, though bigger games with a modern modification of Rapid Fire seemed to be being played too.

Other than that I seem to be getting a WW1 collection going too- the Emhar tanks are lovely, and the early battle before the trenches were dug appeal too.

Following work I did on my BA I’ve developed an interest in the Franco Prussian War- I’ve picked up some figures cheap but I’ve yet to really decided what I’m going to do with them.

Also in 28mm I’ve got a cheap German Army for Secrets of the Third Reich, and my old Necromunda gang Is lurking somewhere in the Shed….

so this is where I’m up to so far. Like I say it really needs some organizing and direction.Especially as I’ve got more ideas fermenting away too.

I visited the FIASCO show at Leeds on Sunday, Held in the Saviles (RIP Jimmy) Conference Centre opposite the Royal Armouries. The venue is pretty nice- big and airy though far too dark- something I’ve noticed at a lot of shows recently, I’m surprised more trader don’t bring their own lighting.

Another thing I’ve seen develop at UK shows over the last 10 years or so is that they are turning more into shopping shows rather than game shows; About a 2 to 1 ratio of traders to games at Fiasco. Perhaps If I scheduled longer to stay at the show I could get some games in ( I got a lift at the weekend from Bill(UFM))… Still most of my time was spent chatting to people I knew from the forums so at least I was slightly sociable.

Purchases wise I got some cheap books, some US infantry in Parsons jacket for my KGN project, I saw the Mutineer Miniatures new 20mm Africa figures, very nice so I bought 5 packs to round out my Generic African force. They’ll be fitted into games from Blackhawk Down to Rhodesia….