I’ve been busy in the shed trying to reduce the kit and bare lead pile. Here are some pics of what I’ve recently finished.

A pair of Ready to Roll Dodge trucks- great for WW2 and possibly Korea. 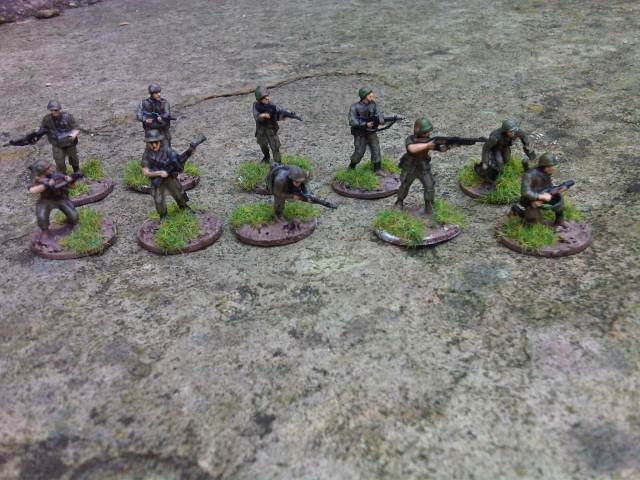 A mixed bag of plastic US for Vietnam.

For this weeks game Brian, Chris and I decided to try out the campaign system from 2 Hour Wargames FNG ruleset. Basically you generate a squad according to the rules and then guide them through a tour of duty. A really nice mix of an RPG and a skirmish game as you have individual attributes for each squad member that can be either an asset or a hindrance.

Once the squad were generate I rolled up the mission and terrain; I have to point out that I didn’t really take any part in the game. I merely ran the rules. All the actions that the VC took were randomly determined, I just kept the game going.

I’ll let Brian and Chris add in the comments section a description of their squad and how the game went.

As for the game the dice decided it was July 1966, somewhere in the interior of III Corps area. Both squads were detached from the platoon to conduct an evening patrol (only 5 turns of the 14 turn game took place in daylight) fortunately the weather was clear for the mission.

I divided my 6 by 4 foot able into 9 areas and diced for terrain and PEFs (PEFs are a rule mechanic that represent a possible ‘something’ out there. Could be something from a abandoned position to a platoon to a bad case of the nerves), 9 areas seemed a bit crowded so next time I’ll drop it down to 6 2 foot squares. The terrain featured a patch of double canopy jungle, where all the fighting happened, surrounded by forest and scrub before going into a clear but hill corner. A Few buildings were dotted about but they were empty of civilians. The game took a bit of prep work and I needed a lot of stuff brought through out of the shed just in case it was needed from a dice roll.

To keep the atmosphere going I put on some Doors and Jimi Hendrix CDs too. 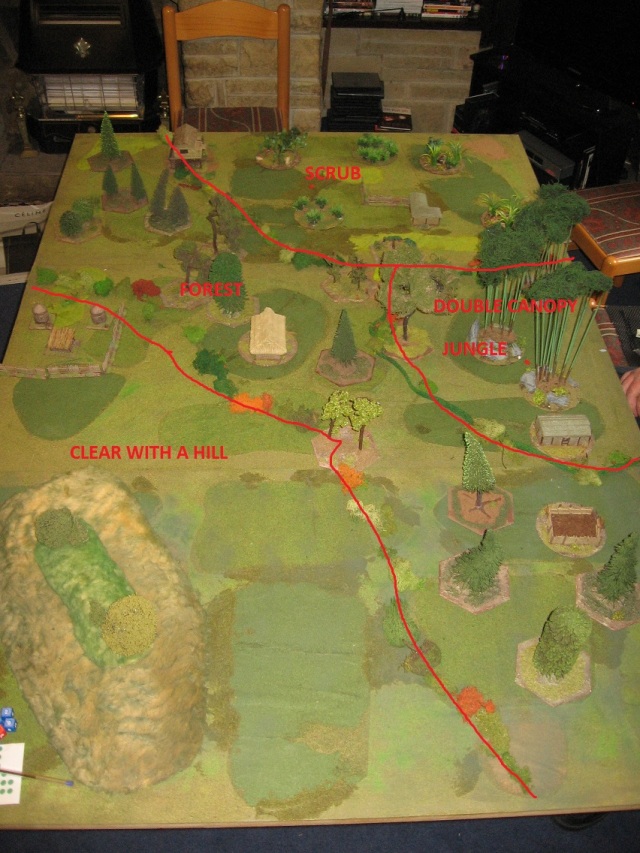 The arrival of the MFVC that was to be Brian and Chris’ was determined in part by the Poltical status of the region the game was set it: in this case level 3: Pacified. However when rolling for the Enemy Activity Level I rolled very high getting a 4. Free World Forces (FWF) support was set at 3. The numbers of PEFs present ended up at 7.

Another view of the table. 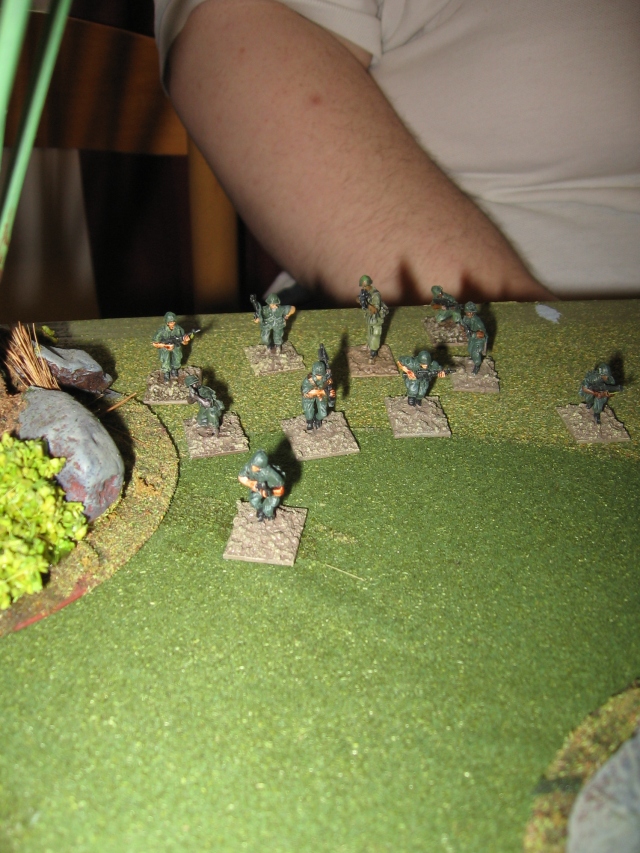 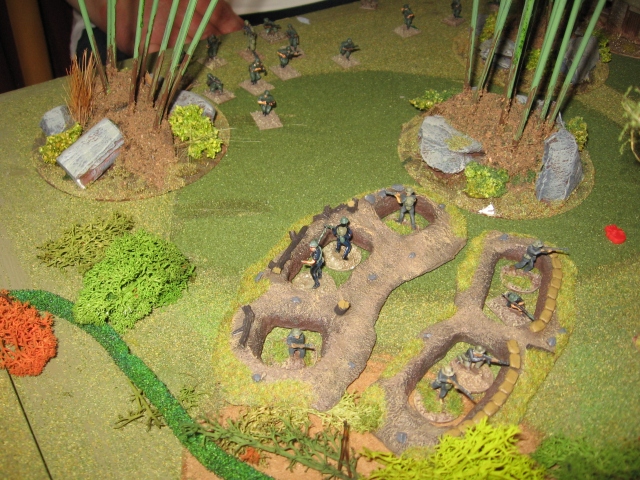 One of which turned out to be a squad in a defnesive position. 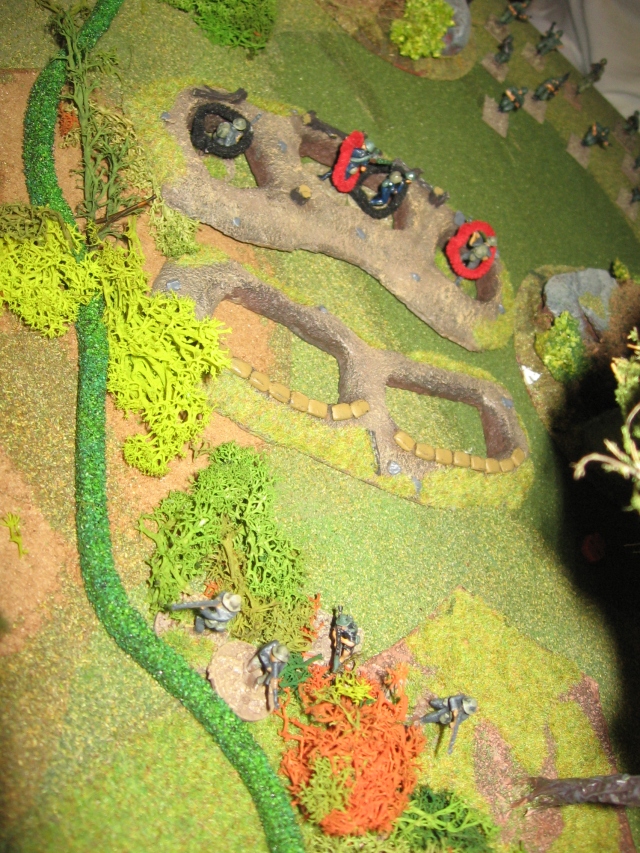 One short firefight later with Chris’ squad half the VC are dead or out of the fight the remainder are running for it.

However the next PEF was a bit more serious…

… a full MFVC platoon having a chinwag. Another, bigger, firefight took place, much use was made of grenades, and Chris’ squad came out on top.

Dealing with the masses of VC that the US stumbled upon allowed the other PEFs on the table to form up and attempt to swarm the the now stalled US patrol. Chris’ squad on the US right flank took the worst of it with a MMG team and 2 assault teams turning up and attempting to rush the grunts.

Resulting in some nasty melee fights. 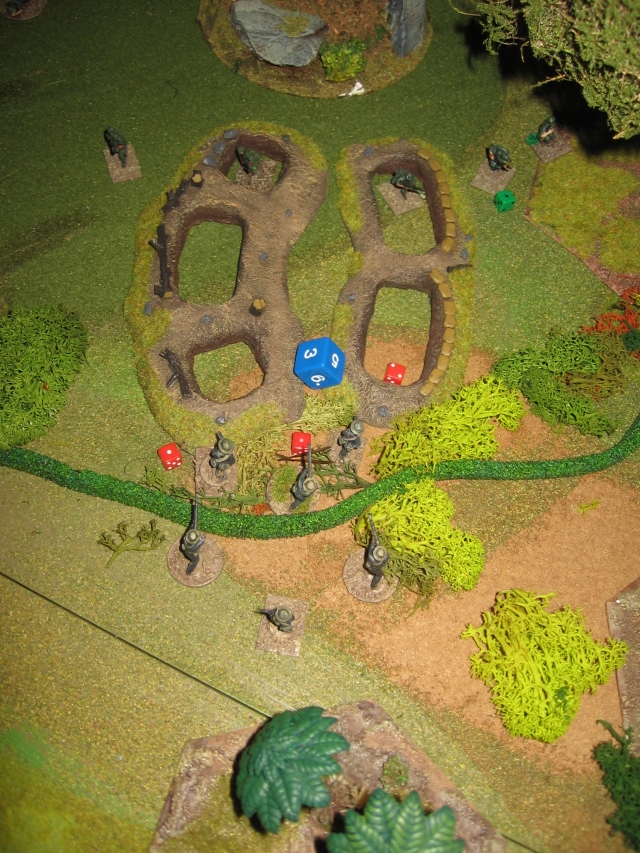 A VC assault team moving in for the kill.

Bad activation dice rolling meant for a couple of consecutive turns the US were impotent while the VC moved in. Brian’s squad on the quieter left flank tried and failed to call in some danger close mortars to held out his beleagured team mate. 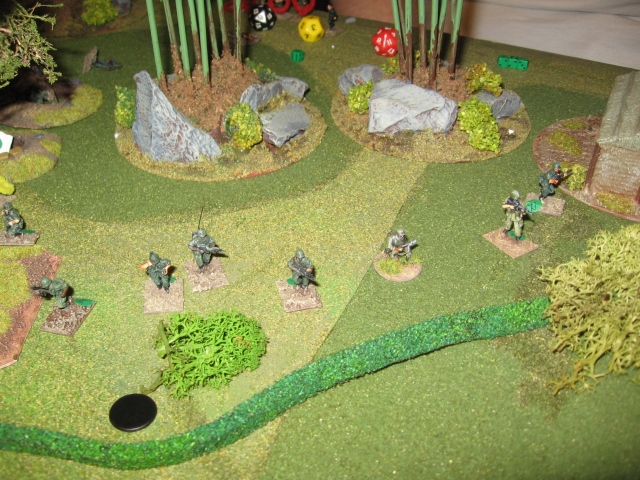 Instead he consolidated his position but only found a tunnel entrance for his trouble, which he duly noted for later destruction.

While this was happening his medic tried to help Chris’ now much depleted squad but that selfless act got his killed. 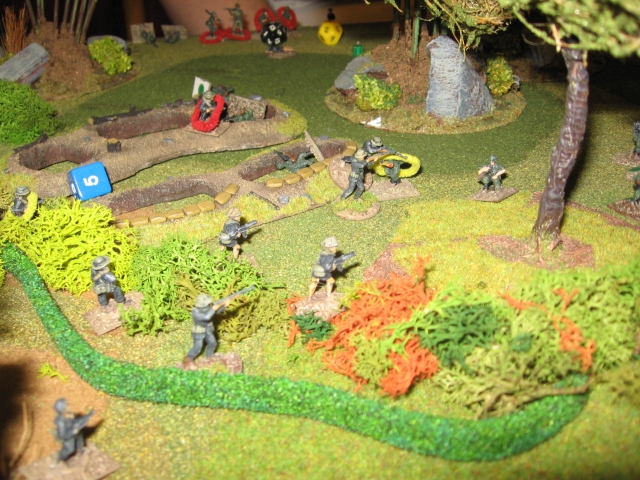 Another VC assault team about to overrun the remains of Chris’ squad.

After ten turns the US withdrew from the field of battle, without moving beyond their first area all game. However the sheer number of VC killed meant that on paper the game was a win for the FWF. Chris paid a heavy price- many wounded and a nearly unforgivable 4 MIA.

All what was left to do was tidy up and write a must see list of ‘Nam films for Chris to watch to bring him up to speed.

It was a thoroughly enjoyable evenings gaming. I’m looking forward to running through my own platoon in due course too.

A group of Spetsnaz from Under Fire Miniatures.

A Maus built from the Dragon kit. 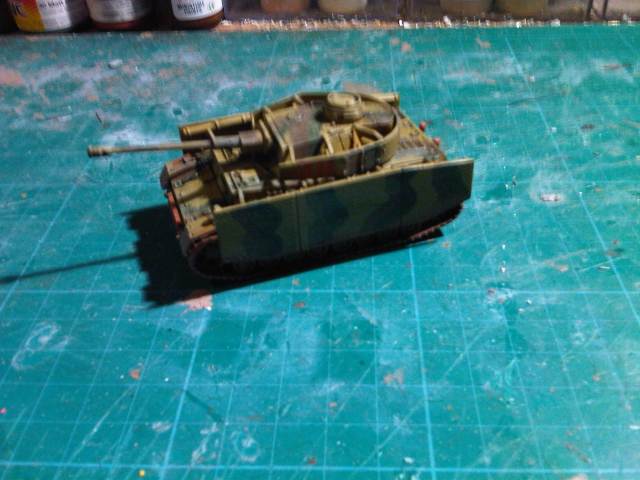 And finally a Fujimi Panzer IV.

Our gaming group are big fans of the 2 Hour Wargames reaction system, however Evan ran a game based on the end battle in Saving Private Ryan and we ran into difficulties on how to do ambush style scenarios. I know their is a school of though that says just set the scenario to start just after the ambush has been triggered- with the initial burst of fire occurring prior to the game’s start… Personally I wanted to have the ambush occur in game (not least because I’m working on a convoy game that will require it- more about that in another post).

A quick brainstorming session later we had a house rule to be tested. Also I looked in FNG later on (the SPR game was run with NUTS! and we didn’t have a copy of the ‘Nam set handy at the time) and sure enough there is a system for Ambush scenarios in there.

So we decided to run a simple scenario twice to see which way we preferred. The FNG way is to have both the ambushers and ambushees start in sight of each other then just roll for turn start as usual to see who gets the drop on who. We felt that this way meant one side totally dominates the other. Our house rule is to have the ambushees as the active player and the ambushers as inactive, then do a mass in sight test for all the units who can see as per CR3.0. This way the firing order was a bit more mixed. The twist we gave it is a few of the ambushing units (a number defined by the scenario) don’t have to roll under their REP to fire to reflect that they are prepared and set up properly. 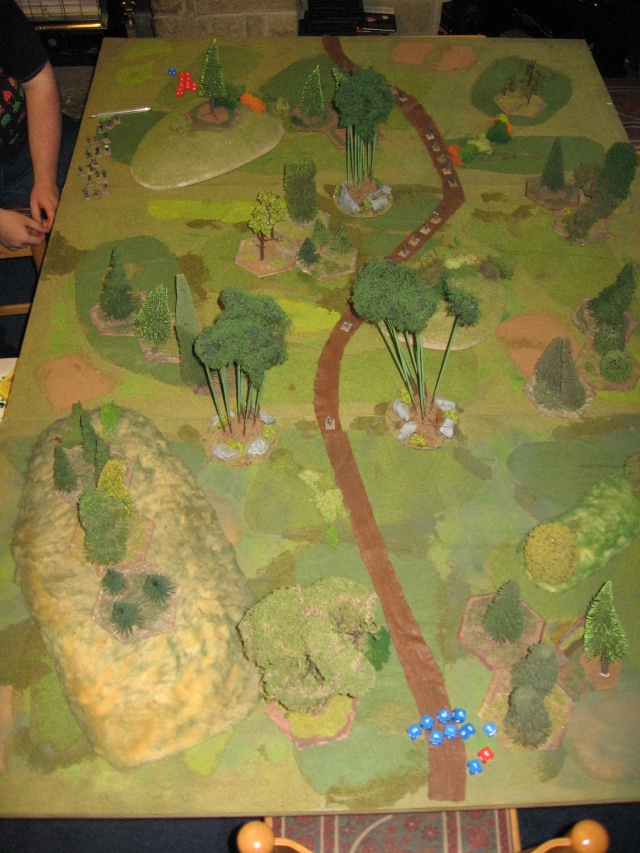 A long shot of the table for the 2 games. The US infantry were spread along the trail in 4 groups. The Main Force VC set up second as the ambushers.

The grunts move up unaware. 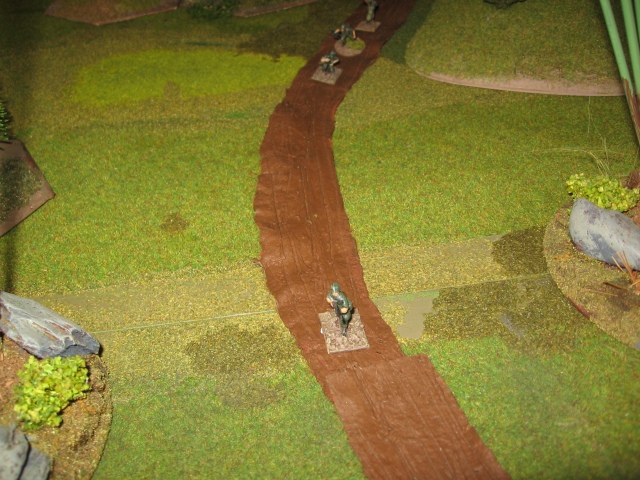 VC hidden in the bushes ready to attack.

When we ran the game the first time the VC fired first and devastated the US patrol- every group engaged was wiped out. The second time we ran the scenario one group of US managed to get to fire mid ambush- ie 1 group of VC got to fire first, the 2 groups of VC and 1 US group all fired simultaneously . The still meant that 2 of the 4 US groups were taken out but the ambush wasn’t as certain. Give the deadly nature of such scenarios anyone considering one should think very carefully at the design state and severely limit the number of attacking units, and or have a large reserve for the ambushed player to call up either off table of out of the ambush zone. 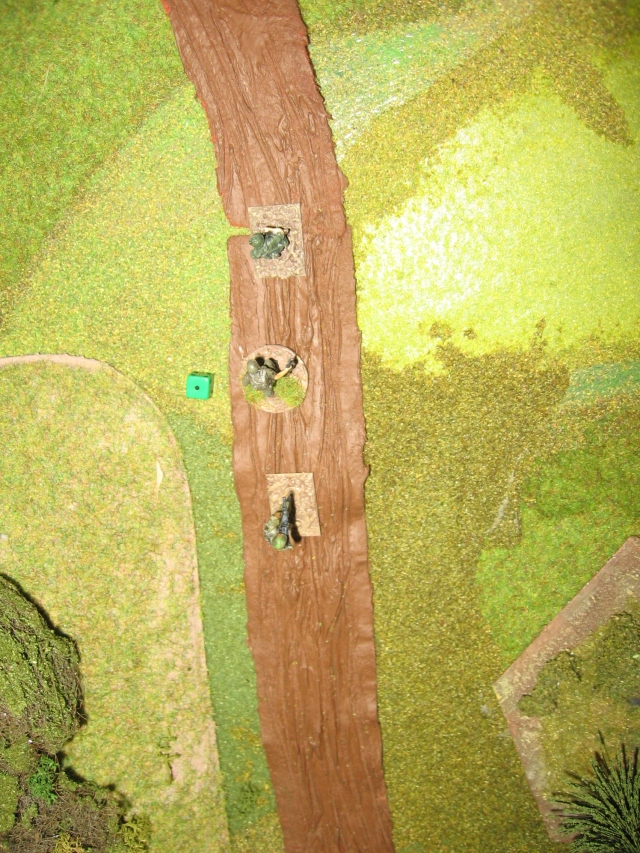 US troops get activated mid ambush. 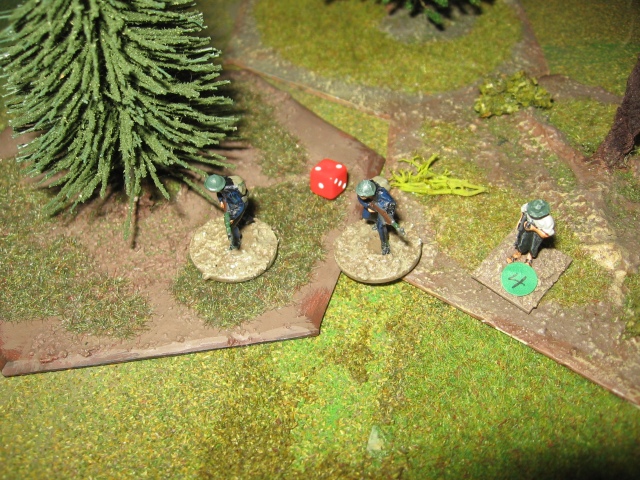 VC shoot into the attacking column. 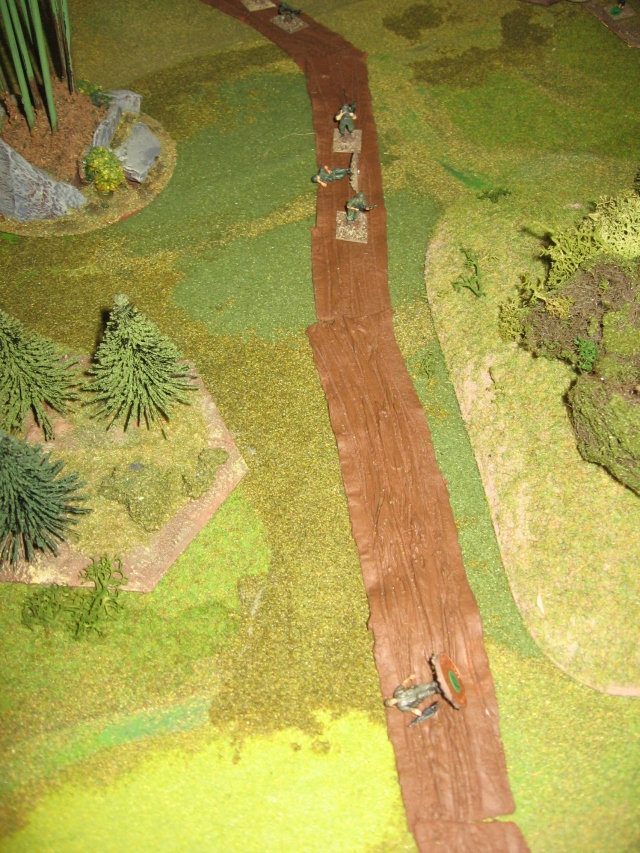 Results of the shooting.

Charlie spotted- time to charge in. 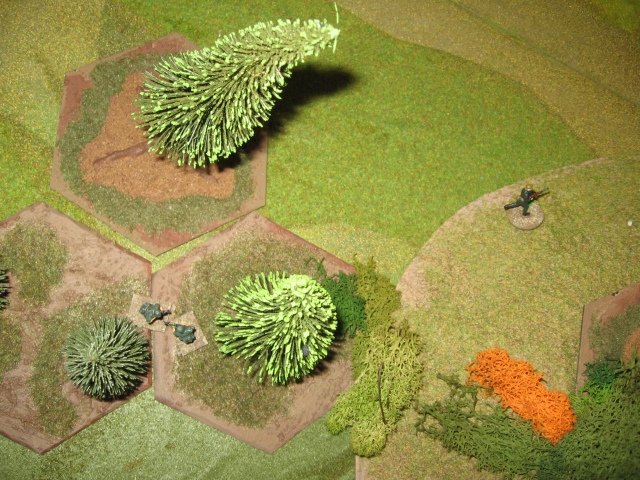 After a messy melee the remaining MFVC legs it out the back of the copse.

All in all an instructive few games- certainly given plenty for us to think about in terms of scenario design. Watch this space for the convoy game too as well as some other ideas I’ve got brewing. Our group have decided to use the house rule in similar games in the future. I’d be interested to see what everyone else makes of our ideas.

Right bit of a heavy month- had a birthday so got a load of stuff from that- which was nice.

That said it doesn’t include a big batch of 1/600th aircraft I got done.

Other than that the lack of AARs is explained that we are breaking in a new player to the 2 Hour Wargames rules so the games have been quite short so no pics taken. Also I’m trying to resist 1/1200 Naval after reading the rules for the Fletcher Pratt Naval game, my floor carpet is blue to….