Been slowly plugging away at the pile and getting a few bits done.

First up a resin house that I picked up from Timecast at the Triples show.

It is based on the house featured in the painting ‘Cemetery at St. Privat’ http://www.musee-orsay.fr/en/collections/works-in-focus/painting/commentaire_id/the-cemetery-of-st-privat-2948.html?cHash=7eb1a93b27 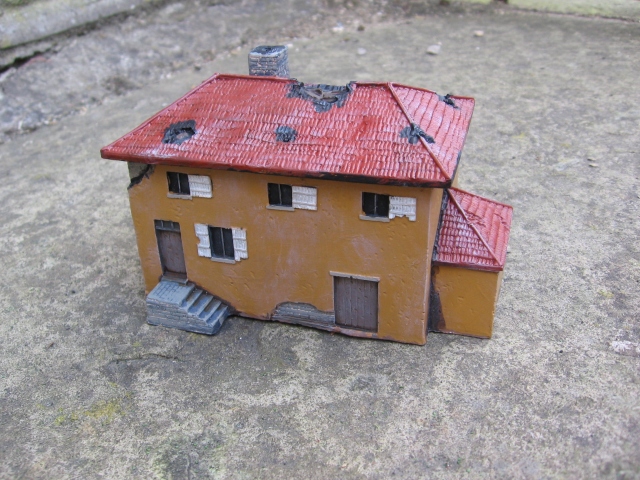 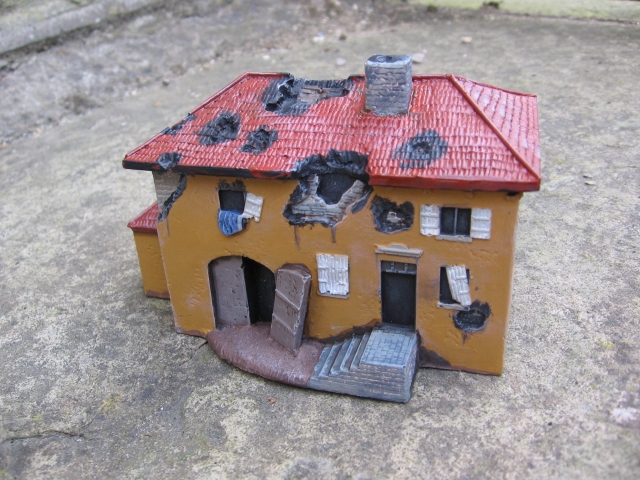 I also finished up the last batch of Decima Mas troops I had to paint for my RSI project. I thought I’d do a group photo of all of them now. I’ve done a headquarters stand, some LMG gunner both moving and prone, loads of SMG and rifle armed rank and file with some Panzerfausts, Panzerschrecks and mortars in support. 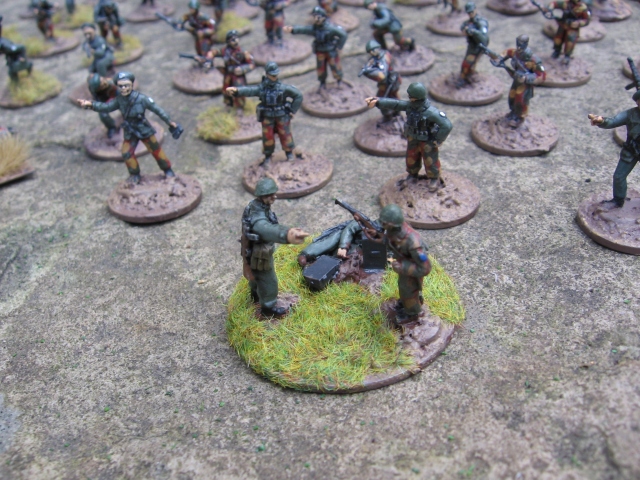 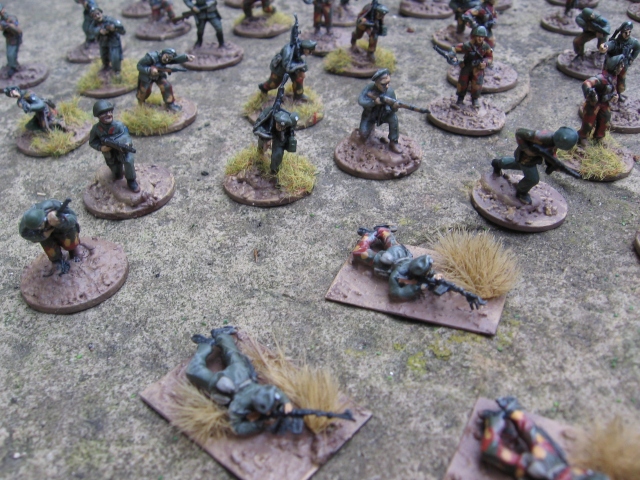 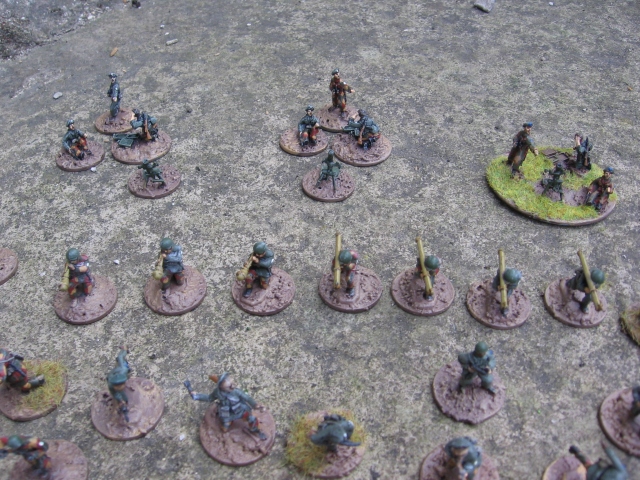 The figures are either CP models in metal or Waterloo 1815 in plastic.

Brian and I were talking about doing some more Vietnam gaming, however he said that we needed some big trees to represent the high canopied jungle so prevalent in that war. So I went into the shed and using what was lying about I came up with a cheap and cheerful solution to the problem. A CD base, balsa, bamboo cane and air drying clay for the trunk and pan scrubbers covered in flock for the canopy. Not the best buiold I’ve ever done but certainly quick and effective which were the main criteria. I reckon with a few more pan scrubbers and flock I can do another 8 easily with the cane I’ve got left which should be plenty for our purposes.

However upon put the pics on to my PC I can see that the edges need touching up on the canopy but that is only a 5 minute job.

Not sure if this pair count as des res’ though…

Both models are from Lancer Miniatures, from the old Queen’s Hussar range. http://www.lancerminiatures.com/

The Arnhem cottage from a different angle. All the sandbags around the ruined walls give it the air of a last stand. 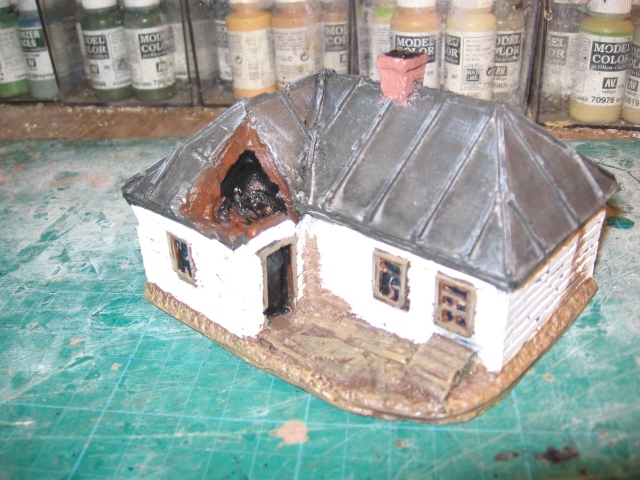 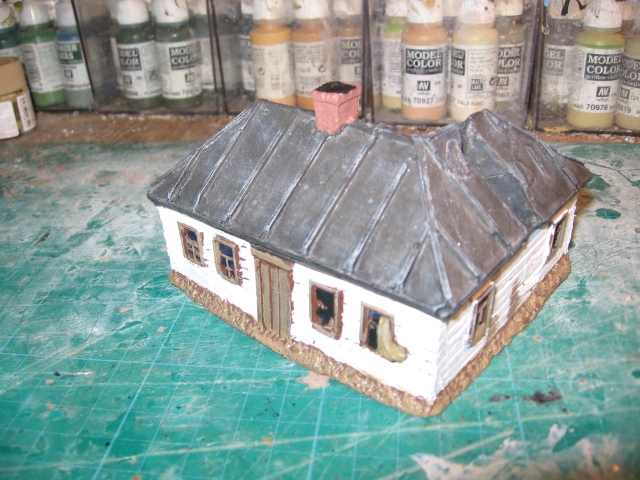 The front door of the house. The detail of the curtain blowing through the window is very nice.

Hopefully these two pieces will be on the table very soon.

A couple of Tuesdays ago Evan and I sat down to play another 2HW skirmish game. As part of my continuing testing of the modern modifications I came up with a suitable scenario. I took my inspiration from an old copy of SOTCW’s Journal and wrote a quick game set in the Yugoslavian Civil War. Rather than a game about Tanks in turned out to be a game with tanks in….

A few months after the Croat people declared independence from Yugoslavia, the Yugoslavian Army, JNA, surrounded the town of Vukovar. The siege last a bit over two months and saw some very heavy fighting.

The general background to the game was as follows: The Serb offensive had been halting in the day’s fighting, leaving three tanks stuck in on man’s land, one is a ‘runner’ so both sides send out a small force to investigate after darkness falls; the JNA had 3 small squads and a tank crew to drive back the ‘runner’, the Croats had a mixed bag of right wing paramilitaries and militia trying to stop them.

The table was out usual 6 foot by 4 foot, three tanks were put roughly in the middle of the board, a T55, a T34/85 and an M36 Jackson (not technically a tank but hey…). I took 3 white counters from my game bits box and put a little sticker under one of them. These were then mixed up and one placed under each tank. The idea was when one of our figures reached at tank we could examine the counter to see if that tank was the runner with out letting the other player know (the quality if one’s Poker face notwithstanding). As usual rules were a hybrid of CR3.0, NUTS! 2nd ed. and my own modifications. 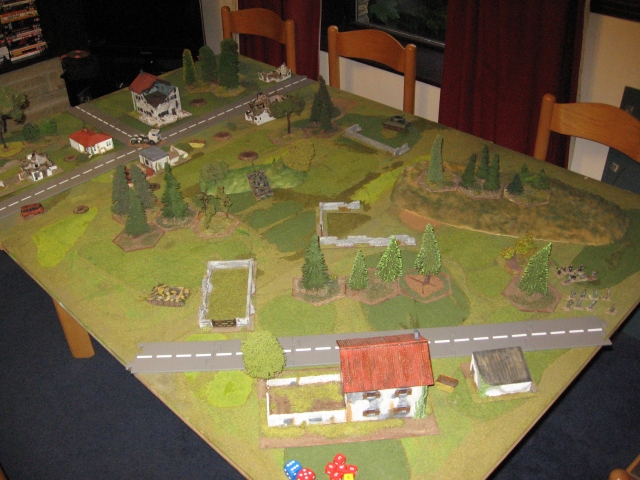 The table, looking from the JNA side to the Croat edge.

The three objectives for the game- only one of which is a ‘runner’.

My mixed bag Croat forces advance in the centre, Evan and I had the same idea a squad to each tank and one held back in reserve. 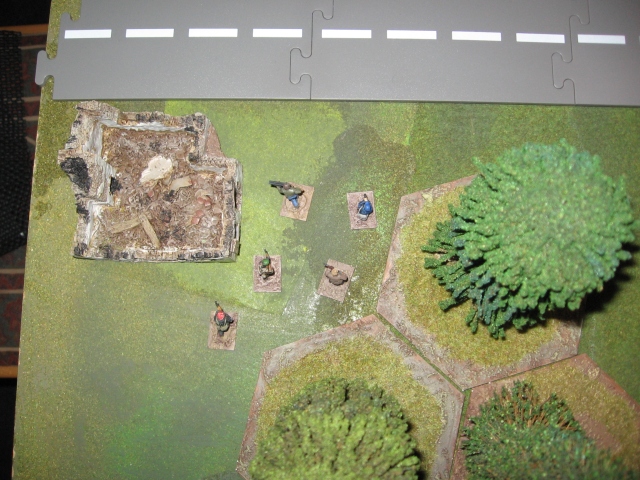 Croats moving on the left flank.

One of the JNA squads.

Another JNA squad and the tank crew.

My Croats hold at the garage while another squads pushed on ahead.

One of Evan’s squads reaches the T34/85 and checks its status. 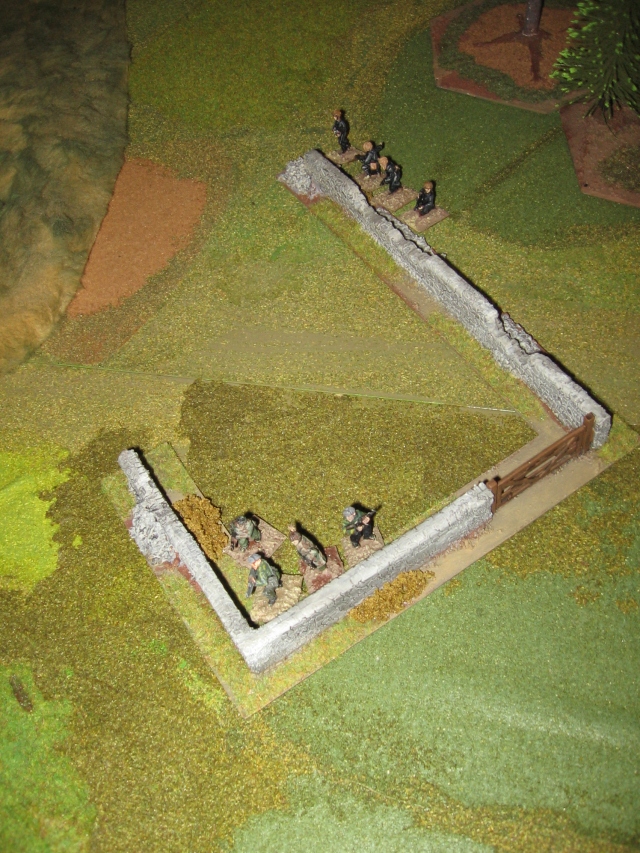 My paramilitary team reaches the crest just in front of the T55. Just able to make out figures in the gloom the fire on the JNA. The red markers indicated killed and Out of Fight figures. 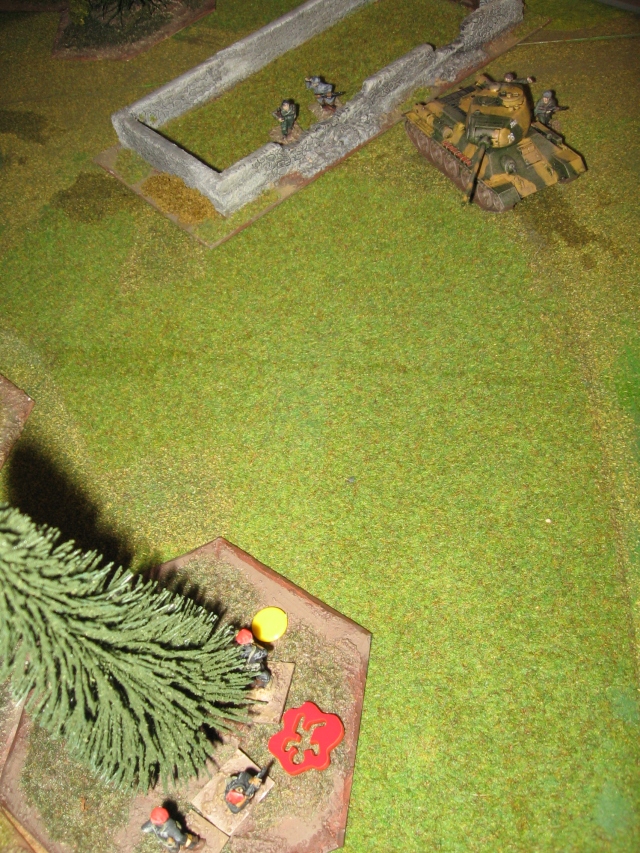 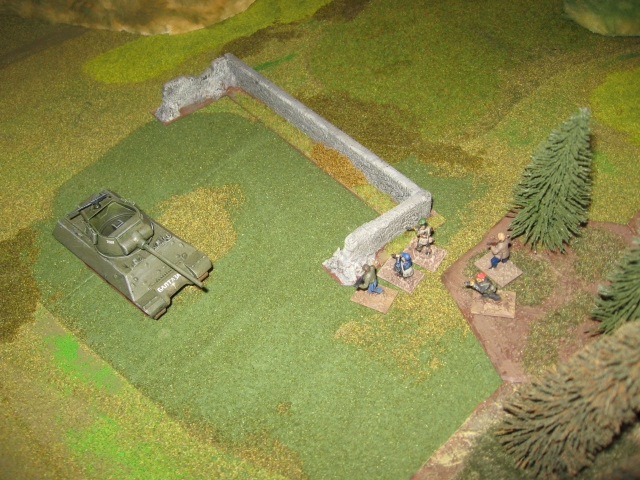 The Croat militia stop at the way to cover the line of approach to the M36. 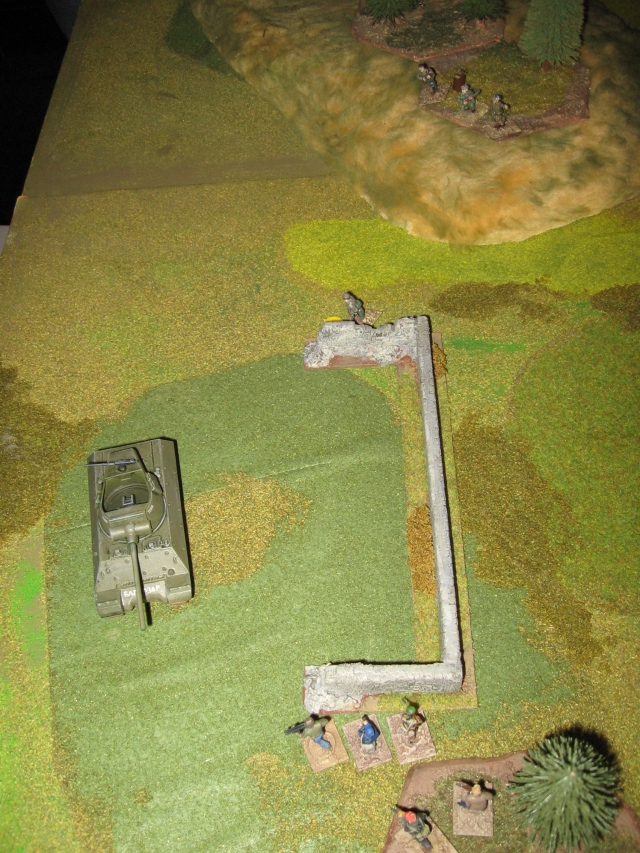 Evan’s squad moves up to try to get to the M36, unable to close due to my fire a ‘Mexican Stand off’ ensues. 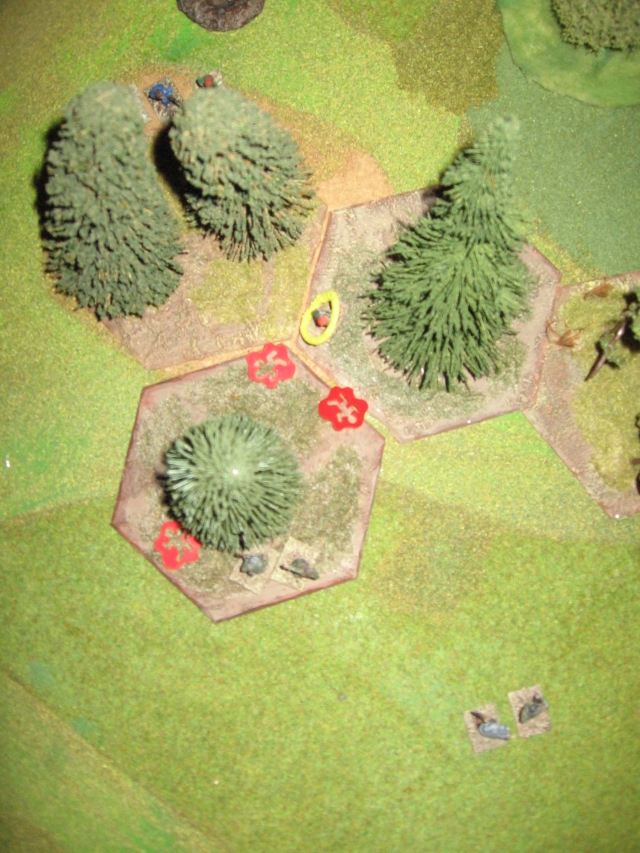 The Croat squad trying to get to the T34/85 suffers several casualties from JNA AKs and grenades.

With my paramilitaries controlling the T55 Evan decided to split his tank crew into two pairs and send them one pair to each tank on the flanks.

Having finished off the inital squad, the JNA move onto the lower quality militia.

With my opponents attention else where I move my team down from covering the T55 (it wasn’t a runner anyway) and finish off one team of JNA and a pair of Tank crew.

Hearing the gunfire Evan doubles back with the JNA and opens up on my exposed Croats. 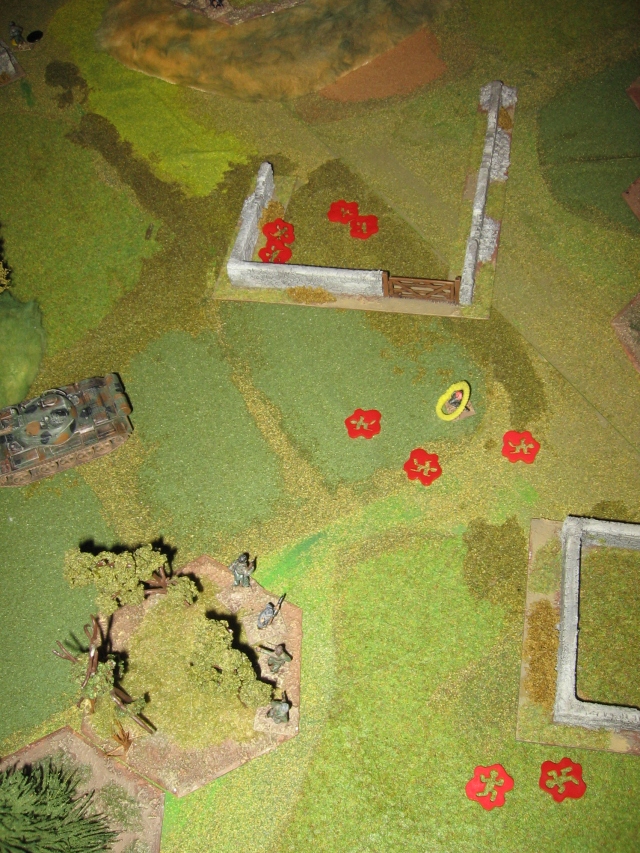 The result was predictable really. 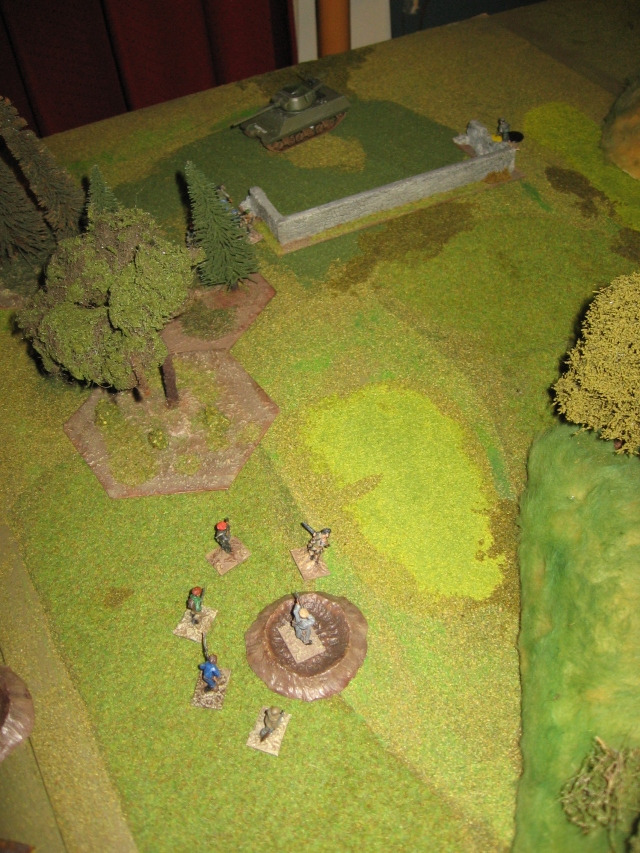 Knowing that the T55 wasn’t a ‘runner’ and guessing (correctly) that the T34/85 wasn’t either I moved my m,ilitia squad over to the M36, with an MG42 they had the most powerful weapon on the table. 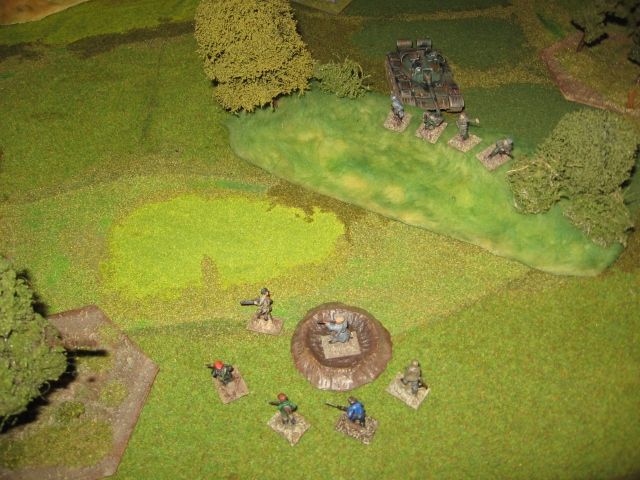 Evan wasn’t keen on my doing this so moved across to the ridge to try and stop me. 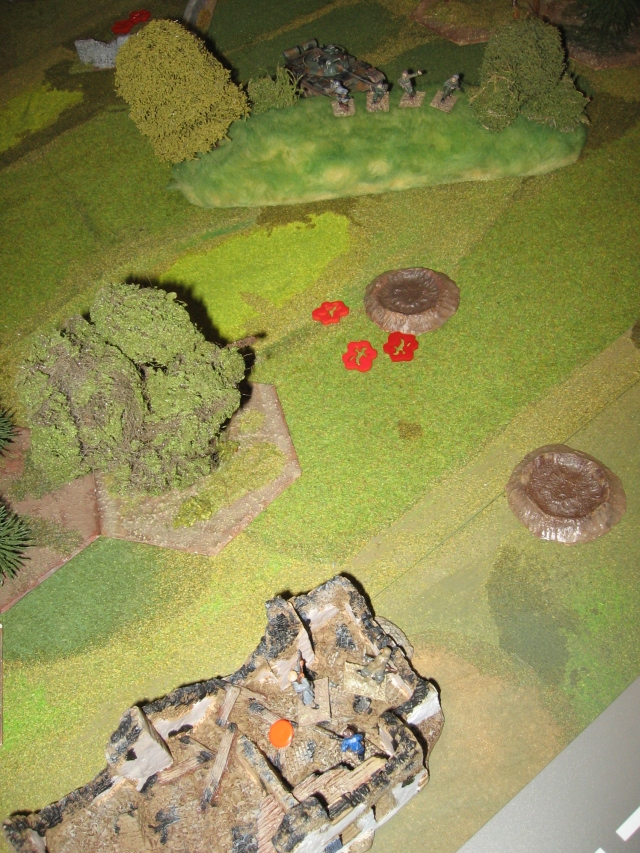 Which he did, the two surviving figures retired back to the relative safety of the ruin. 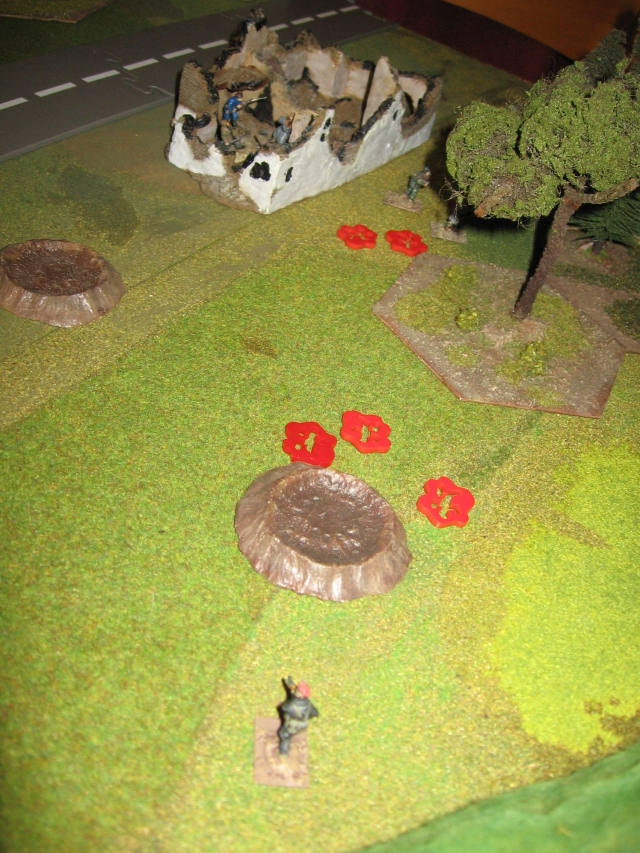 However my losses were avenged by the surviving paramilitary NCO. 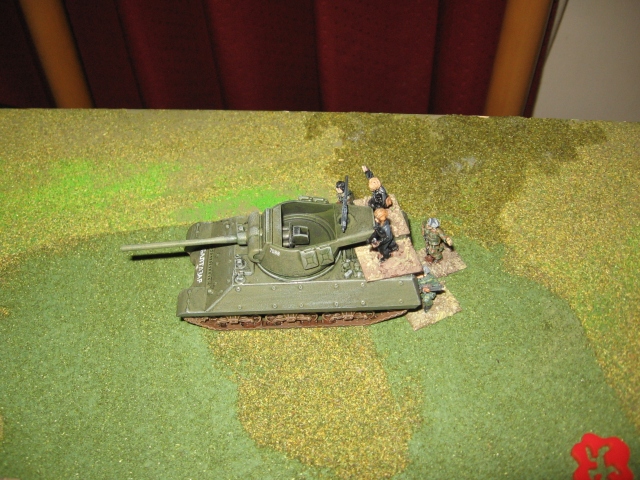 The backwards and forwards nature of the combat in the midle of the board had split my forces allowing Evan’s better trained troops to reach the functional M36 and crew it. Here the game was finished as I had lost all of my Anti Tank capabilities. 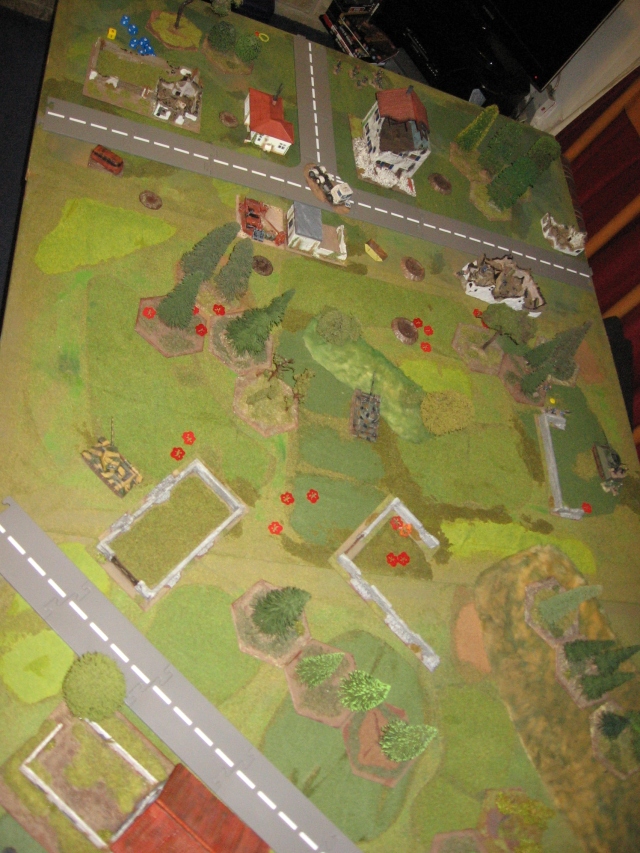 The table at the end of a hard fought game.

Both Evan and I thoroughly enjoyed the game, the action swung back and forth all evening, with neither side prepared to hold back, in fact we both commented that we took far higher casualties (about 60-75% of each of our initial forces) that would ever be tolerated in real life or even in a wargame that forms part of an ongoing campaign. Playing at night added an extra level to the game, short range firefights were the order of the day and the long range dominance of light machine guns was completely negated.