I have finished another batch of 54mm figures for Little Cold Wars and took advantage of the afternoon’s sun to get some photos of them done outside, so here they are… 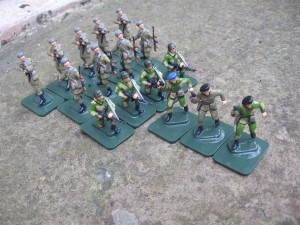 The camo (KLMK) suited ones:

I’ve just finished this batch of mounted infantry for the Bush War in Rhodesia. They are 20mm from Under Fire Miniatures.

They are armed with a variety of FN FALs, FN FAL Heavy Barrels and a shotgun; with four different horse poses to play with there is a fair amount of variation to be had. 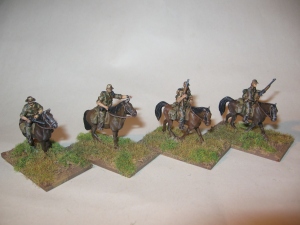 Looking at the photos there are a few bits of stray static grass that need to be brushed off.

Since my early teens I’ve been a fan of Philip K Dick’s work: both his novels and the various film adaptations.

So when I found this link to photos from the 1982 film it was too good not to share:

See if you spot the Quad cab…

Also as I fan of alternate history fiction and PKD I can definitely recommend the Amazon pilot of ‘The Man in the High Castle’; pleasingly it has been green lit for a full series.

Things have been quieter than I’ve wanted on the blogging/painting front… been rather busy with postgrad work and trying to keep the black dog in his kennel… still due to various reasons (if you ever see me in person I can moan to you about it) I’m taking a break from the former for a few months, calling it a leave of absence makes it sound rather formal ….

Still with the unexcepted free time I will try to do a bit more painting and hopefully have something to show here. Though I have been painting Easter eggs for my nephews (apparently my Sister has a tree with them hung on in their house- new to me too).

The oldest wanted a footballer so I did this:

The poor quality phone camera photo reminds me of noseybonk’s terrifying visage (look on youtube if you didn’t have your childhood in 80s Britain) but it looks better in real life.

The middle one wanted a ninja turtle so I came up with this: 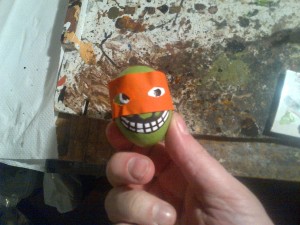 Both were really pleased with them- in fact they found it hard to believe they were hand painted. Nice to put my limited brush skills to something else, and shows I have been painting something. The good news is the youngest nephew is too young to request one the bad news is I’m taking delivery of another dozen polystyrene eggs tomorrow and a list to work through… will keep me busy for a while.

On the plus side I am keeping up with gaming, managing one or two a week. In fact I’ve been playing through some old classic boardgames that I missed the first time round.

I enjoyed a 4 player game of ‘Fury of Dracula’ which plays really well- the hidden movement works nicely and from what I’ve read on the net the 80’s version I played is better than the latest reworked incarnation.

Also I played (and lost) a 3 player game of block/Mega Mania. A fun little game, looking forward to a rerun of it. 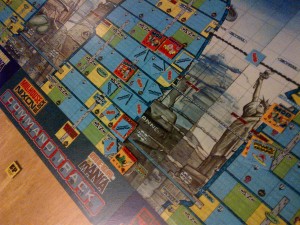 A rival block after my vigilante carefully placed a demo charge…

Other than all this gaming on my PC is keeping my mind off things, no doubt playing Wargame: European Escalation and Air Land Battle will spur me back into cold war gaming… watch this space.