I’ve fancied a pre WW2 skirmish set up for a while now, something where the LMG and SMG don’t dominate so much and given my long standing interest in Civil Wars and political violence the Spanish Civil War (SCW) seems an obvious choice. Having a box full of mediterranean styled buildings is also a boon. A Very British Civil War could have been an option but I have some reservations about the idea, well less about the idea more about the way it seems to be commonly presented. On the topic of presentation of games I was at a well known midlands based wargames show a year or so back and was admiring a 28mm SCW set up. I got chatting the one of the guys manning the game and I commented on the increased popularity of the period, he said yes but “Don’t read the history; it’s too depressing”. At that point I made my excuses and left; each to their own but divorcing the game from the history is pretty much antithecal for me. See my earlier post which made reference to a game that dealt with the difficulties of the period in a responsible manner.

Anyway enough ramble form me on to the pics.

A group shot of all the vehicles I have painted so far- all are 1/72nd models from Miniairons.

A pair of Bilbao armoured cars. 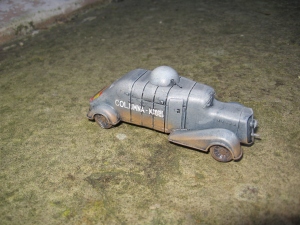 A large armourced car based on a truck chassis the Hispano Suiza MC-36.

Finally an Ambulance- the shoddy build job is a reflection of an off day by me and my subsequent attempts to fix it rather than and fault with the kit. All off them are superb models. I look forward to getting and building more off them.

Next step is to start on the infantry, again from Miniairons.