The Cold War is one of those periods of history that has long fascinated me. Not least because of all the ‘what if?’ possibility. I’ve been gaming the skirmish possibilities using 20mm fora while now and have fancied looking at the larger picture for a while but have not wanted to get bogged down in all the tech heavy detail that the 80s style ruleset revelled in (looking at you Challenger 2000 and Corps Commander). Fortunately I hit upon the Nordic Weasel ruleset ‘5core: Brigade Commander’. The rules were bought as a PDF and the relevant bits were printed out; in a moment of sense I cut out some counters to try the rules before I commited to anything.

The game works great. A weak Soviet divisional attack on a weak British Brigade was played out in well under three hours. Very abstracted but enough flavour there to get and keep your interest. So I dusted off some old H&R 6mms I’ve had for 15 years or so and repainted them- Soviets and USA. I then picked up some 2nd hand terrain and Evan bought himself some West Germans. With our 80% completed forces we had a game to see how things were looking… 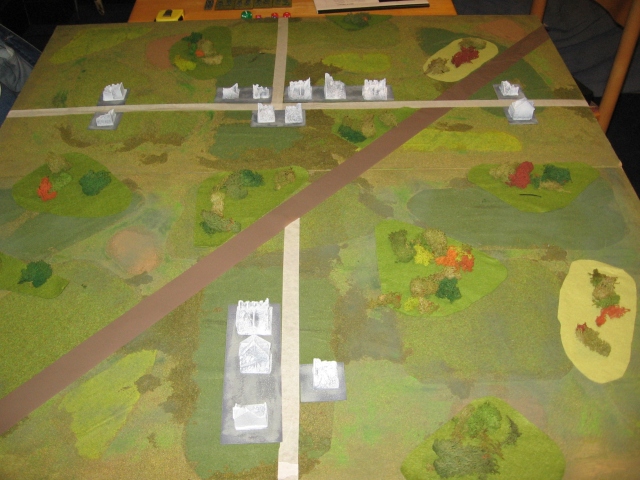 The table- packing and masking tape stood in for roads, felt and lichen for woods and plastic card textured and painted makes the extend of BUA.

My forces: 3 companies of Mechanized infantry, 9 companies of armour with a HQ base (the BMP2s) and 2 recon and 2 AA attachments.

Evan had a similar mix or armour and infantry.

We have gone for 50mm squares for company bases and 30mm square for attachments.

I borrowed some of Bill’s superb collection of 1/285th GHQ aircraft for the game as well.

It was just a simple encounter game so we both advanced to meet each other- Evan got to the best positions quickly with two scurry moves in a row.

I tried to get a strong defence on my flanks by placing tank companies in the edge of the woods.

In the centre the mech infantry didn’t suffer too well.

Neither in the end did the flanks when the Tornado turned up.

At this point I conceded as I was losing units far quicker than I could get my reserves up to fill the gaps so I had been pretty much out manouvered.

All in all we are all very excited with the rule set. Plenty of scope to make plans for future projects too. Look out for more in the coming months.

Evan and I have been playing quite a few Air War games recently. They are quick to set up I suppose and you can fit a couple of small games into an evening so they suit our purposes well.

Often we try out a small combat just to see how the rules (a Victor Frankenstien like creation that has pulled in bits for everywhere) will handle a given situation. Evan has just finished painting up some 1/600th Me262 so we have been trying them.

The first game saw three Me 262 taking on a box of four B17s, they are hard hitting planes and their 30mm cannon will certainly make a mess of anything that they can hit.

As always the defensive fire of the B17s should not be under estimated. Getting this balance right has taken quitea few games and we are still not sure if it has been achieved to everyone’s satisfaction yet.

The second games was to try out something that we had both read of: Bf109s trying to keep US fighters off ME262s as the try to gain speed and alititude. Of the three that took off one exited the table with the other two turning back with damage. However the cost to the attacking Americans was heavy.

Sadly I took no pictures of that game; I find that 1/600th aircraft don’t photo too well with my limited skills and equipment.

Evan and I have talked about a campaign game for the new year. Hopefully it will be a crude approximation of the diofferent approaches to air combat the Germans and US took. The German player is trying to get 30 kills for his Ace pilot where as the US player has to get 30 kills for his entire squadron (who will start with no Ace pilots). The game will be played in groups of three games US versus generic German force, German versus generic US force then a head to head against both squadrons. I’ll post more details of the campaign system when I have written them.