Firstly apologies for the paucity of posts. I’ve been busy with postgrad work. Also with megagaming which is the topic of this post. 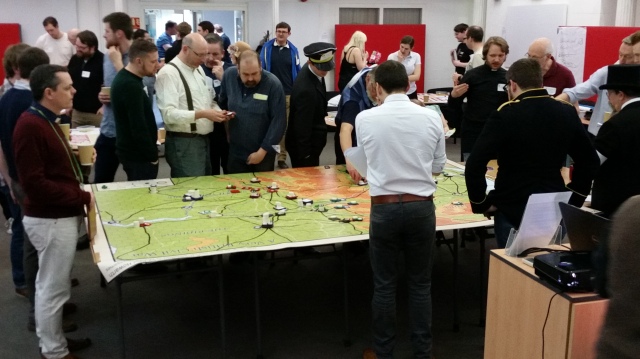 Firstly Peninne Megagamers put on their first full home grown game: A Very British Civil War which was run in Manchester. Based on the popular alternative history gaming project (long story short: Edward VIII refuses to abdicate causing chaos and he invites Mosley to form a government, civil war starts between Socialst, Royalist, Fascist and Anglican factions) we had the four major factions battling over the Pennines from Liverpool to Hull, York to Chesterfield. 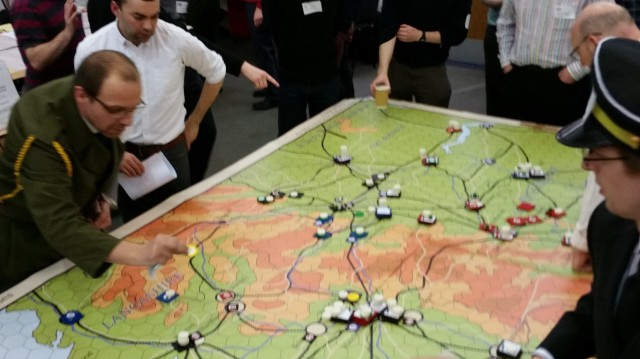 Each faction had a number of players split by region and role. Military commanders moved forces on the main map and fought occassional battles whilst the political players played a seperate game trying to influence the population of each area with rallies and marches. Ideally this activity was controlled by the overall leaders so that when a military player took control of a town the population had already been won over to that faction’s cause. Control of the towns and cities meant extra income allowing the purchasing of bigger armies etc.

My role in the game was as a military umpire. Whilst armies were moved on a main open map the actual battles too place on a gridded board. With four battle boards ready the three military umpires (John, Rupert and myself) were expecting plenty of business but other than selling massive amounts of ammo we were fairly quiet. A few changes that would increase the number of battle in the game were discussed post game and I’m sure they’ll be worked in to future games. 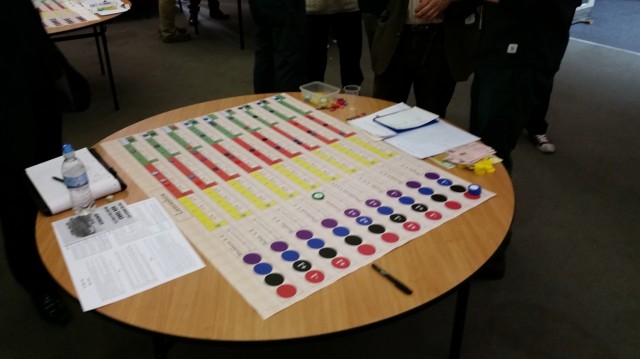 The mixture of political, military and diplomatic roles seems to mean that there was something for everyone and all the players seemed to of had a good time.

The following weekend saw Paul, Rupert and I go to the Hammerhead Wargames show in Newark to run a demonstration of Rupert’s forthcoming Jena game, given that the Napoleonic period is not something I know much about I swotted up with an Osprey the night before. The game is similar to the VBCW one in that players move unit on one map then go off to a seperate battle board to fight out and battles. The biggest difference is that the moves in the Jena are done on a double blind system to really get that fog of war that is often hard to replicate in table top games.

We had a good run through of the game at the show. It was pleasing to see one young lad wander over to see what is Dad was doing then get into the game himself. Being the only map based game amongst all the table top games made us stand out and hopefully it has resulted in extra interest and players for the game. 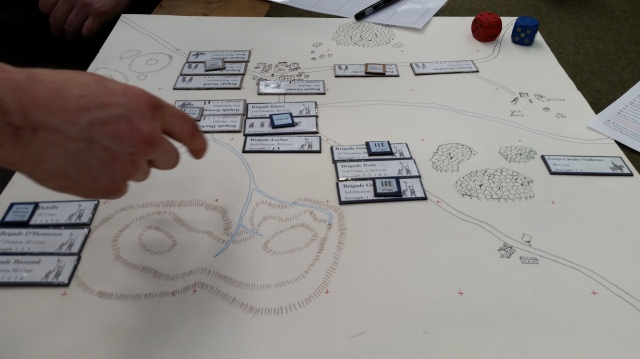 A fortnight after Hammerhead it was myself and Simon’s turn to demo a game. A the Triples show in Sheffield we ran through our Korean Chosin game to drum up some interest.Simon had done a superb job with the map and I knocked up some counters with his help. I bought some flags to add a bit of colour to our table 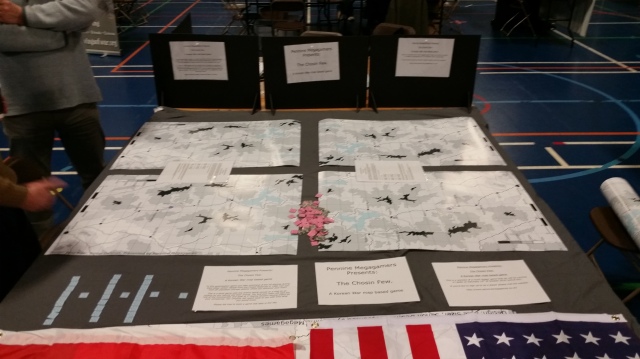 Different to the above games it is a true double blind game with both moves and combat being resolved by umpires who then feed back the results to the players. Although we only let the punters at Triples play the US Marines on the day as we presented a stripped down version of the game. Again those who played the game seemed to have a great time and it was encouraging to see younger gamers pick up the ideas of the game (there being no rules to learn) and get into the spirit of things. It was nice to be asked by another show’s organiser to put on a similar game at his event, must have liked what he saw. 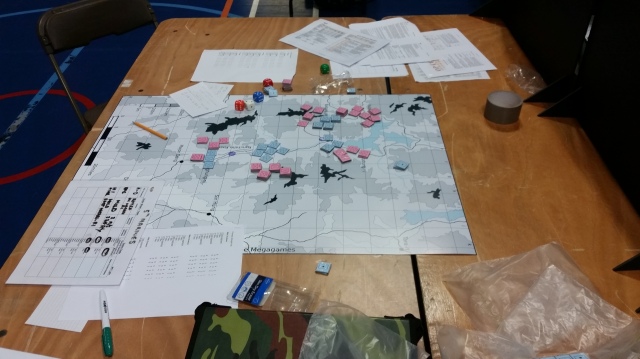 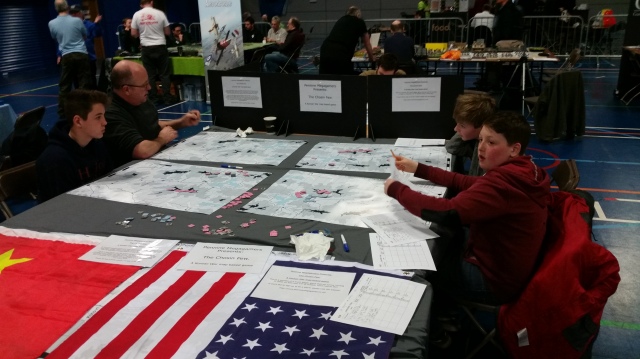 Please look at the following links to register for either game – and the Urban Nightmare and Dungeons of Yendor games that are upcoming too.