After due consideration Brian decided to place his forces as below, all of the companies dug in or taking cover as appropriate.

Evan decided to have a broad advance, mixing the little mechanised infantry in and amongst his tanks. After his first turn, which he elected to take as a Scurry, his dispositions and intentions looked like this:

Evan put most of his effort into his right flank. A high number of activations (using his assets well) meant that he encircled the bottom wood.

At this point Brian rolled a Scurry turn and used it to withdraw from what would have been a heavy attack. Evan then took up the positions that the Soviets had vacated.

Focussing on the centre and his left flank Evan moved forward and occupied the hills for a commanding position.

As you can see Brian has started to lose his units. Unfortunately this seemed to be the high water point of the West German advance. Brigade Commander uses two different dice in its combat system, Shock dice produce morale results and Kill dice produce the losses (we just use blue and red dice respectively. Basically for the remainder of the game Brian was spectacularly lucky with his shock dice. As soon as Evan tried to advance Brian’s units firing on overwatch would send them scurrying back to which ever spot of cover they tried to emerge from. Thematically you could explain this by the fact that the West German forces were deeply unsettled by the Soviet offensive so much so their counter attack went in at something far below peak efficiency. Mechanically Brian just rolled a lot of 6s on the blue dice. 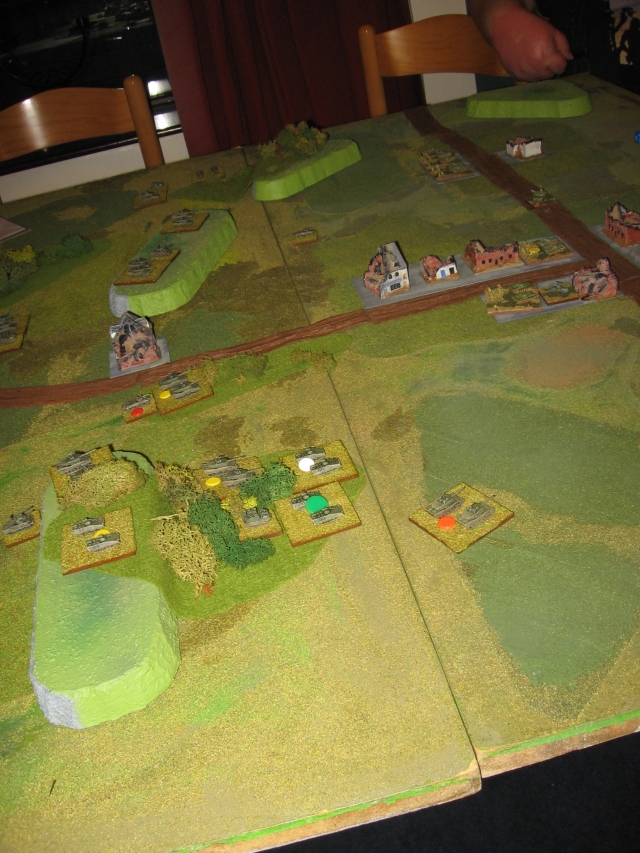 Though he was pushed back in the West German right flank Brian’s units did not break completely. Still inflicting losses on Evan.

Whilst artillery is very potent in the game, as it should be in a game at this level, it did not shift that many of Brian’s units out of their cover, it really wasn’t Evan’s night. That the right flank took all of his attention he failed to breakthrough at all in the centre of left.

With the attack completely stalled and the time getting late we decided to call the game.

It was a hard-fought game and at time a little frustrating for Evan his plan was sound but Brian’s luck was seemingly endless. Still next week will see the 6mm forces take to the table again, we shall see what happens.