Saturday saw Pennine Megagames put on a Korean war flavoured game by Simon and I: ‘The Chosin Few’. As you have probably guessed it was based on the desperate battle around the Chosin reservoir in North Korea in the winter of 1950 that saw the 1st Marine Division conduct a fighting withdrawal in terrible conditions against a numerically superior foe.

Running a megagame has been on my personal wargaming ‘to do list’ for a long time, I wanted my game to have the same feel as my first: Jim Wallman’s Operation Goodwood run at the Royal Armouries in 2011. Also I wanted to do something different from a standard set piece attack so I decided to pick a fighting withdrawal, one of the trickier military manoeuvres to pull off. Even spliting the duties 50/50 with Simon a lot of work goes into a megagame and I certainly have a lot more understanding of what you need to get one up and running. It is also one of the reason my blog posts have been a little thin on the ground recently. The production of the game components, whilst enjoyable, was rather time consuming.

After a few trouble with venues the biggest worry I had over the game was recruiting enough players, given the popularity of some of the other games that Pennine Megagames have run that has not been a problem as they often went to a waiting list. However both of this year’s military themed games (Chosin and Jena) seemed to suffer from a combination of low numbers and a high rate of players dropping out. Oddly though the military themes seem popular it is the games that give or are perceived to give more individual agency to the players that are the most popular. Perhaps there is something off putting about a game set in the more rigid hierarchy of a military organization.

Given the increase of interest in megagaming after the viral success of the Shut up and Sit Down video perhaps the demographics of those attending games have shifted. The choice of topic, the Korean War, may not of helped matters as a lot of people considered it too niche. Whilst amongst the wargames community it is a well known battle in a well known war I will concede that in the wider gaming world it may be seen as something as an unknown. Fortunately enough players came to ensure the game ran well. I’m pretty sure that it ran as well as it did partly because of the numbers of players. 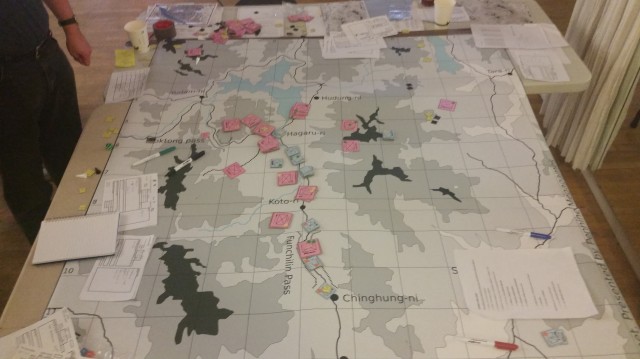 The control team did a superb job, after a few turns they were running the map by themselves requiring very little input from either Simon or I. Given that a couple of the team are not hardcore wargamers I really appreciate the effort that they put in. Before the game Simon and I decided to split the control duties with him running the map and me taking care of the rest of the game trying to ensure it’s smooth running. Part of this was visiting the players commanding each side as their superior officer. In the role I could give them certain prods or on one occasion admonish them for not being aggressive enough. It was during these in character visits that I gave out any reinforcements that had become available. We decided not to program the arrival of these forces but to use them as a mechanism to moderate the pace of the game. Unlike the games I run at home an early finish when people have paid you for a days gaming is undesirable. As a balancing mechanism it worked well and was nice to be able to follow the variable fortunes of the game from the privileged position of the control map.

One player was not too happy in the role that he had as a Chinese Commissar, after a brief chat about things regarding the game and his expectations of it, he inquired if he had any agents behind the enemy lines. I thought that this was an eminently sensible suggestion and came up with a mini game on the fly. I drew up a list of agents in the villages/ towns that the UN players occupied and gave them a ratings based on their loyalty to the party, the accuracy of their intelligence and the effort that they were prepared to put in to collect it. It was a good addition to the game as it acted as a reconnaissance asset for the Chinese who were otherwise just finding units when they made contact with them. (In contrast the American had six flights of Corsairs that could either be used for tactical strikes or reconnaissance.) In Hamhung for example they were two agents both loyal to the party but one who was lazy and unreliable who mostly gave the Chinese what they wanted to hear and the other who gave an exact report every time. Having a double blind game made it much easier to decide on the rate of the flow of information from the contacts. Other ideas were recruiting mountain guides to gain a movement advantage and setting up a propaganda unit in Hamhung, the proved useful when the UN started to bomb the town in support of combat operations there. These addition had the double bonus for keeping all the players involved in the game as well as adding extra depth to it. On the topic of propaganda and the media one of the control had a mini role in the game for one turn; they took on the persona of Marguerite Higgins and were ‘flown’ in to interview General Smith commanding the 1st Marine Division.

In retrospect a lot more could have been done with the commissar role, other than the few bits that we developed onthefly with those players being asked by control to report back on the morale and socialist fevour of their troops. If the game were to run again all of these aspects that evolved during the course of play would be developed much further.

Given that the obvious objective for the Chinese is the city of Hamhung at the bottom of the map, the origin of the UN supply lines, it madde sense to havea mini game prepared for the urban combat there. Having two megastacks fighting each other for a dot on a map would have been rather unsatisfying from both the player’s experience and a game design point of view.

Overall the game ran as well as I hoped it would. I had made a few minor errors with labelling the counters but nothing that couldn’t be rectified witha few strokes of the pen. Everyone I spoke to after the game seemed to have enjoyed themselves and for a game with 20 players it was very satisfying to hear that. The Pennine Megagame calendar has been finalised for 2017 so it will be the year after that when I do my next game. However there will be a trimmed down show friendly version of ‘The Chosin Few’ going to Fiasco in Leeds at the end of this month if anyone wants to see it.

You can find Simon’s write up here: http://lestradesgame.blogspot.co.uk/2016/10/the-chosin-few-post-mortem.html

Things have been a little slow recently. A series of headaches meant a trip to the optician; this revealled a sudden deterioration in my vision. I’ve got new glasses but they are taking a bit of getting used to so I’ve not been spending much time on the PC or in the shed.