The 4th February saw Pennine Megagames host their first game of the year, reprising last year’s Very British Civil War game. Starting where the last game ended  we saw four factions battle it out in the north of England. For those of you who are not familiar with the setting imagine an alternative 1930s where King Edward refuses to abdicate to marry Simpsons, this triggers a chain of events leading to Mosley being PM. Fascists battle Royalist battle The Anglican League battle the Socialists.

The game is a nice mix of political and military play, meaning that there is something for everyone’s preferred style. The game started with the fascists in the ascendency both politically and military but a strong socialist block in South Yorkshire. My role on the day was as the military umpire responsible for overseeing all the combats movement on the map generated as well as acting as ‘shop’ for any military themed supplies. I also had to feedback any pertinent results to the political umpires, for example air strikes of heavy artillery used against populated areas would have a detrimental effect on any political or financial support to the guilty party. At this point I should like to apologise to John Mizon as he had to read my barely legible scrawl to find out who had shelled who. After every turn there was a quick radio bulletin read by John Moley, who did a fantastic job again reprising his role from the original VBCW. This was great as it allowed umpires such as myself who had a pretty narrow view of the game the chance to catch up on the political manoeuvring that had gone on. ?I find this useful as it added a bit of context to the subsequent map moves and combats. The new venue in Sheffield was pretty much perfect- a working Army Reserve bases based in a stately home style house on the edge of Sheffield. 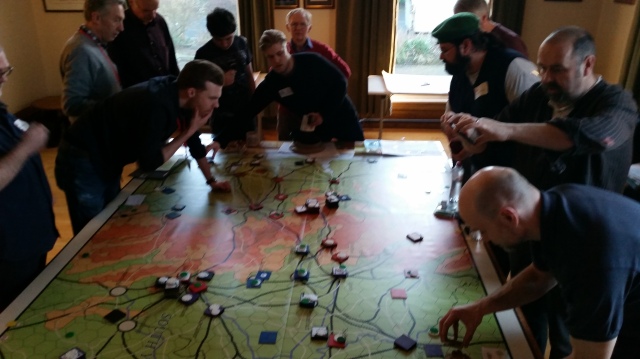 I had a pretty busy day- after a few turns the combats ran themselves: the board that the fights took place on was quite straightforward and many players had been in the first game too. A few changes were made to how the game was set up to hopefully generate a few more combats. In the last game many players were content to just sit tight and not attack each other. This worked a treat the game saw everything from bitter urban combat in the ruins of Manchester to large armoured clashes on the outskirts of Leeds and armoured trains supporting militia in the foothills of the Pennines.

For a strong start the fascists were quickly pushed into a corner, the game turning into a 3 v 1 knockdown, a result of some player deviating from the brief and some fairly unlikely alliances being formed: still that is megagame  players for you… Towards the end of the day the Anglican League were taking to the field with some pretty substantial armies.

The most memorable part of the game was the death of Spode (a fascist former March Warden of the North) which prompted this Hitler rant parody video:

All in all the game went well, everybody seemed to enjoy themselves and their may well be a third part next year.