In this penultimate campaign game, I was drawn against my erstwhile colleague James and his rather strong Venator gang. He was several hundred points ahead of me, especially as he used one of his territories to get one of my champions to miss the game… so I got extra tactics cards which I was determined to put to good effect. Playing with a limited deck of cards has its advantages… what you lose in choice and flexibility is made up by knowing your cards well and how best to use them.

The scenario was quite simple, the game would start as a straight up gang fight, however one of the gangers was actually a purestrain Genestealer in disguise… the ultimate aim was to take it out of the game, this being an instant win for the side whose ganger administers the coup de grace. How do you know which ganger is the Genestealer pretending to be? Easy every time a figure takes a wound a D6 was rolled: on a 5 or 6 the figure is replaced by the Genestealer, only one Genestealer was incognito. Once it was revealed a further dice roll would determine it behaviour. 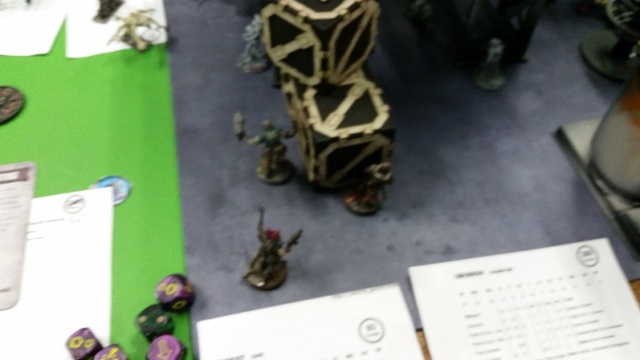 I decided to be bold for this game, I figured that whilst it isn’t in my best interests as Van Saar to push close to the enemy gang I didn’t want to be a long way from the Genestealer when it appeared.

Eschewing my usual ‘take the high ground’ approach I went low to make the use of the ground level cover.

The game progressed quite slowly, neither James or myself could convert hits into wounds so several turns went by without much happening. James did try to infiltrate some gangers in behind me. That didn’t go as well as expected, my Van Saar ganger proving far more competent in close combat than he had any right to be. 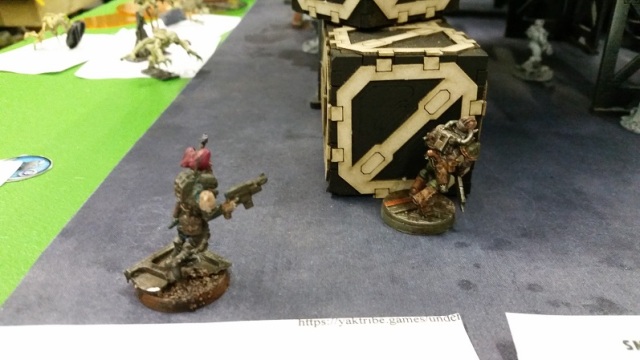 The game threw up several funny moments… a pair of my gangers got hit by a incendiary grenade setting one alight. In a panic he ran across the front of my firing line before rolling on the floor in agony, sensing an easy kill a Venator moved into close combat. Fluffing the roll my ganger stood up to fightback promptly dispatching his attacker before going back to the serious business of extinguishing himself. 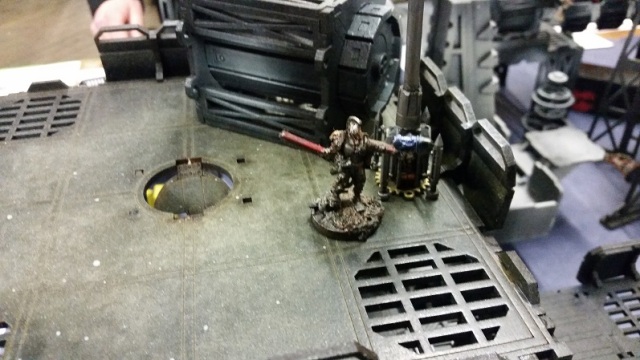 Both of us were unlucky with ammo rolls with lots of our guns going out of ammo… James’ Venator with a grenade launcher, having already ran out of frag grenades decided to try his luck with a krak grenade… missing so badly that he hit one of his own side taking them out of the game…. 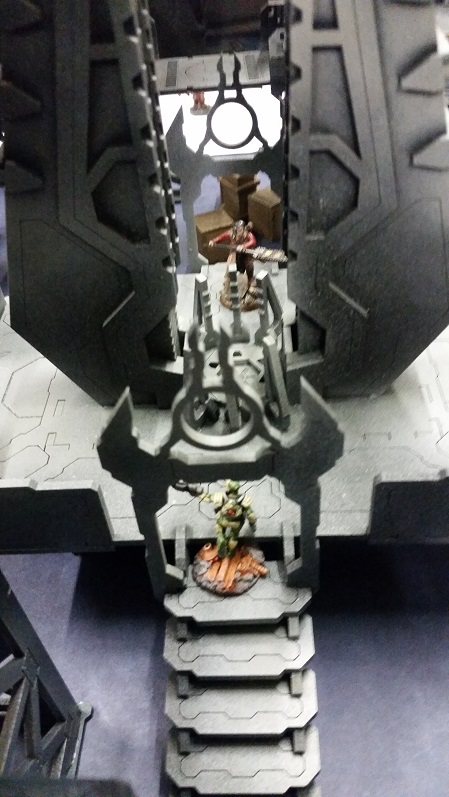 My high risk ‘push forward strategy’ wasn’t really paying off- I had many fighters out of the game- felled by more powerful weaponry. The Genestealer turned out to be disguised as one of my juves, it took a ganger out of the fight then made a beeline for the opposite table edge, trying to escape. Fortunately, the route took it past and in front of my plasma gun armed champion… a couple of blasts at full power stripped it of its extra wound, then a venator with a bolter felled it at the end of a turn. Both of us had pushed gangers forward to intercept the fleeing monster. With it prostrate on the floor victory would go to who ever got priority next, sadly I’d already used my tactics card that would of given it me automatically. I won the roll and my juve moved up to get me the instant win, not a moment too soon as I’d only just passed the roll not to flee. 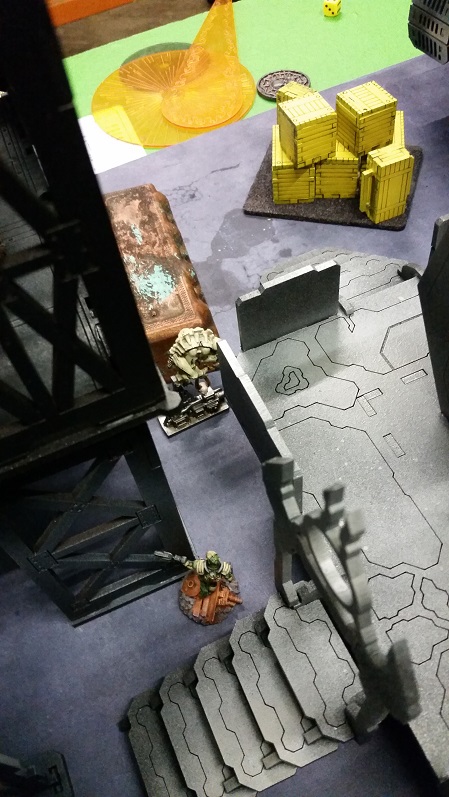 Thankfully the post battle sequence went well for me, no nasty injuries, only one fighter missing the finale and a free juve was recruited to my ranks to make up the numbers.

It was a great game loads of fun- thanks to James as well as Marcus and Mark for answering the rules queries.

10 comments on “A Genestealer in disguise: Necromunda Campaign game 7.”