One of the silliest things a gamer can do is get stuck in an arms race… trying to get the biggest/ most powerful unit… it is even sillier when this is with yourself. Bearing that in mind I present my IS7: a Soviet prototype that should give the Germans with their dug in E100 pause for thought.

This beast of a tank, aka Object 260, was design in December 1945 and weighted in at 68 tonnes. Armed with a massive 130mm gun fed by an autoloaded it also carried 8 assorted machine guns (2 in the hull, 2 in the turret rear 3 co axially and 1 on an anti- aircraft mount). The behemoth had up to 300mm of armour and was proof against the german 128mm PAK (the main armament of the Jagdtiger and the planned armament of the E100) from the front. 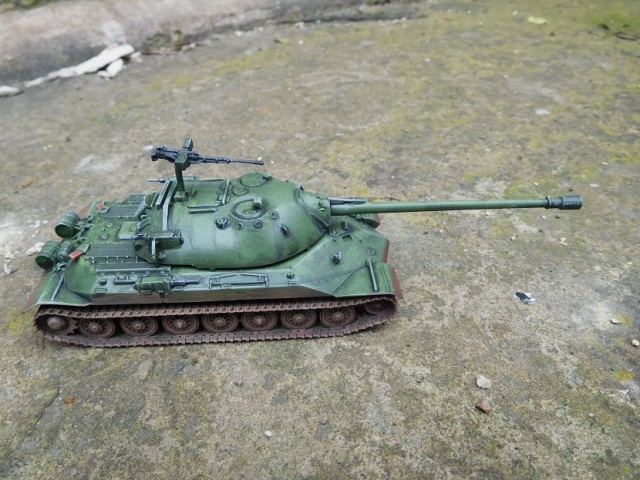 Seven protypes were made but it was not, for many reasons, decided to put the type forward for full production. It remains the heaviest tank the Soviets/ Russia has ever made; a surviving example is in Kublinka museum. It was followed by the IS8 which eventually entered service as the T10 (the name being changed after Stalin’s death).

This 1/72nd kit is by Trumpter and was a pleasure to put together. I painted it with the usual acrylics. It should hake a decent opponent to all of the silly German experimental stuff I’ve got if I could only find somewhere big enough to take advantage of its main gun. It will probably be used as an objective in a skirmish game…. it may even face the Western Allies in a very early Cold War game… why not I guess?