My Cold War gaming collection grows ever bigger with this modest set of additions. 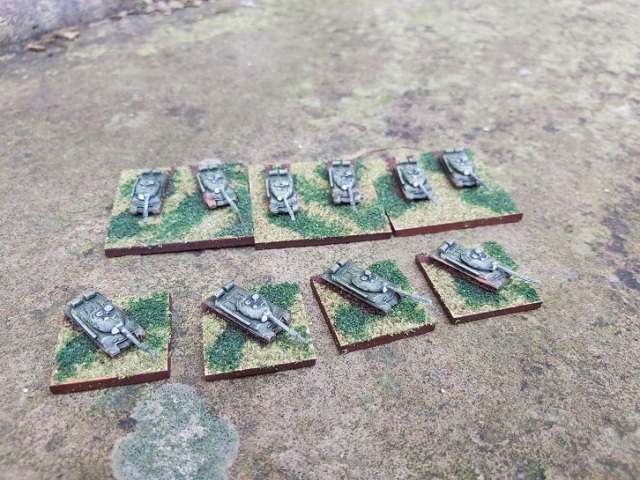 The T10 heavy tank was the ultimate iteration of the IS tank from World War Two, the IS designation was dropped after Stalin’s death. Armed with a 122mm gun it was intended that these heavy tank would act in the overwatch/ supporting fire role to the smaller gunned T54/55 and T62 tanks. A battalion of them was to be found in a Tank division. With the advent of gun launched ATGMs their raison d’etre diminished and as the Cold War progressed they were relegated to more 2nd line units. Still they’ll be a useful addition to my Soviet collection as they’ll allow me to replicate earlier formations to fight my friends’ Leopard 1/ M48s in the case of the West Germans or Chieftans in the case of the Brits.

The PT76 was similarly an early Cold War tank. Armed with a rather small 76mm gun their amphibious capability meant that they were an ideal recce tank. Given their rather weak armour and gun it is surprising that they saw service with the Russian as late as the second Chechen War in the late 1990s. They also served extensively in other theatres, notably in the Middle East and Vietnam. Painting up these two bases now allows me to field up to a battlion of them in 5core: Brigade Commander terms.

28 comments on “From the Shed: Yet more 6mm Russian tanks.”