I’be been a bit quiet on the blogging front recently and that is due to my upcoming megagame eating up all my hobby time. The playtesting and writing is over just now got the production side of things to do…

… I have been getting in the odd game here and there. Tonight was a playtest of some Vietnam mods to 5core Company Commander that Evan is working on ( sorry no pictures). The game before that was my Chechen game- the scenario needs tweaking before we play it again but it looked good- and I did take some pictures: 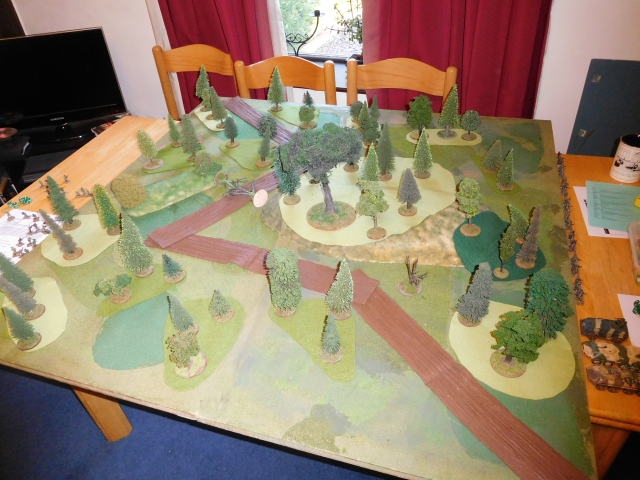 A establishing shot of the table- a road that needed to be cleared going through heavily wooded ground.

Some of my Chechens dug into and ambush position.

Covered by the guns of the AFVs the Russian infantry begins to advance.

As is usual I took loads of photos at the start but then got wrapped up in the game and forgot to take so many. Still endless photos of my Chechens being gunned down by 14.5mm MG fire wouldn’t be a great reflection on my gaming skills now….

I was doing some reading on the battles that Army Group Centre was in in 1942 on the Eastern Front late in bed the other night and the thought occured to me that I wasn’t enjoying the book… that got me thinking it was perhaps because it was translated from Russian as I’ve never enjoyed reading any book that has been translated from Russian. Whether it is a history book or Dostoevsky and regardless of who the tranlator is they have never sat well with me. Have any of you noticed this?

One more thing of note: I did play in one of those ‘Escape Rooms’ that are very popular at the moment. Basically you are looked in a room and have to solve various puzzles against the clock to win, ours (I went with some of the Pennine Megagames crowd) was submarine themed- that got my vote straight away. We escaped with over 10 mins to spare so we did quite well considering there were lots in our team who’d never played before. Good fun and I’d do one again. No photos from that either as they don’t want to spoil the surprise for subsequent players. The link to the company’s web page is here.