A couple of weekends ago I was in Leeds for the most recent Pennine Megagame offering ‘A Shot Heard Around the Universe.’ This was an original offereing by Tim set in a universe of his own creation. Imagine a series of inhabited systems at the edge of a galaxy owned by a distant but powerful empire, the systems are feeling hard pressed due to increasing taxes and feel a little forgotten… the whiff of rebellion and secession is in the air.

Being a space game I decided to volunteer my services and provide some 3D props to the game. I thoughht if every team had a model planet it would not just add to the visual element of the day but a physical representation to identify with would help team immersion in the game.

The models were surprisingly simple to do. Once I found some polysterne balls (and one ping pong ball) of the right size I mounted them upon bamboo skewers and primed them with a tick coat of PVA. This was to give the balls a bit of rigidity and well as give the paint something to stick to. Expanded polystyrene can be difficult to get paint to adhere to at times.

I got a list of the descriptions of the planets from Tim and put the base colour and basic continents on with a brush. After that it wasa simple job to shade the planets by dabbing on various complimentary colours with a bit of sponge, blending it all together whilst wet. The final touch was bit of white sponged on those planets with seas to represents clouds. I didn’t go to excess here to keep the underlying detail. 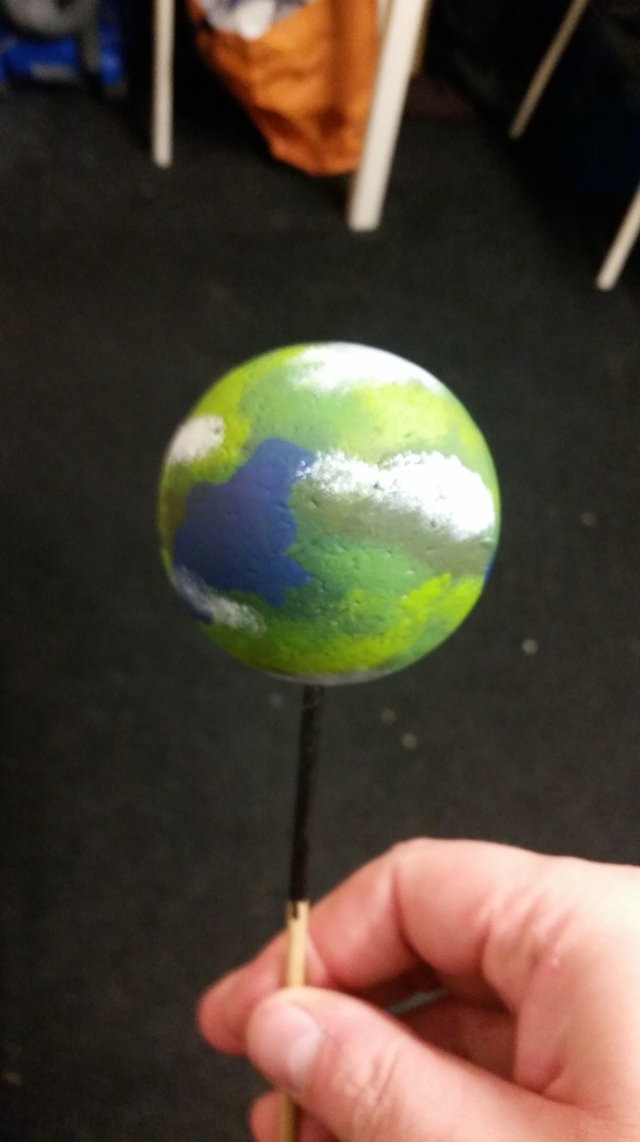 After another coat of PVA to seal them I made some stands for them with cut down pens and air drying clay.

Once all set up on the large game map I thought they looked pretty good and added to the day. 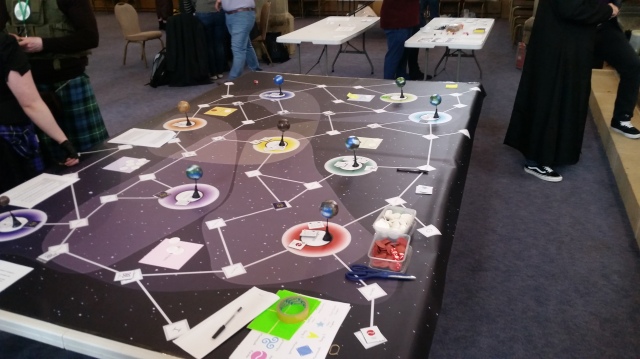 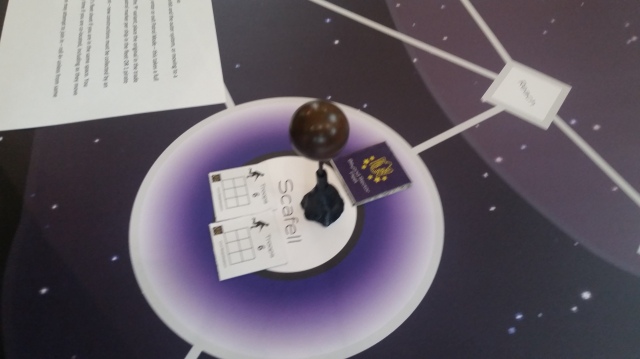 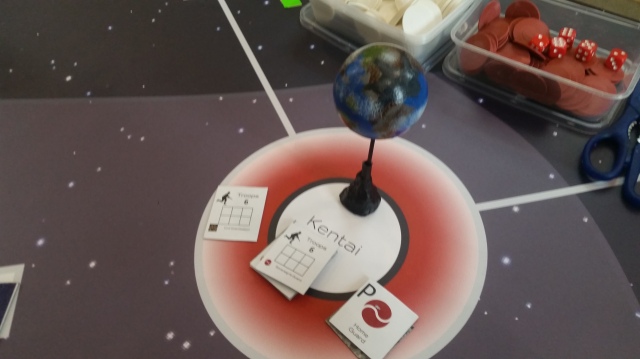 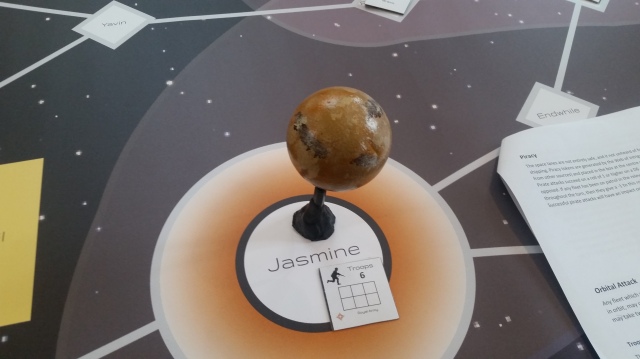 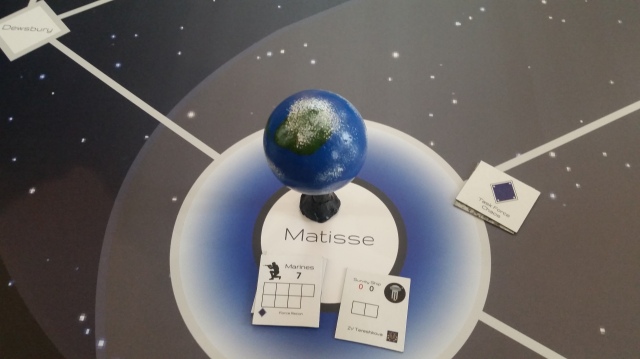 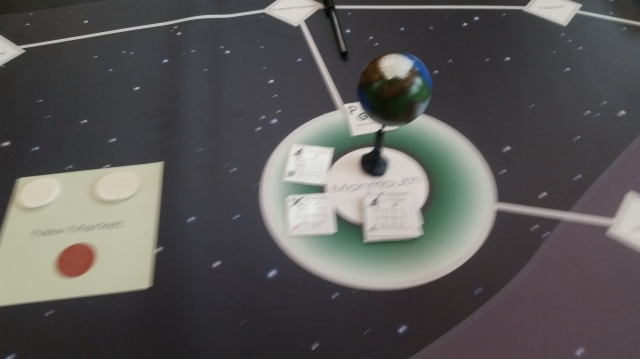 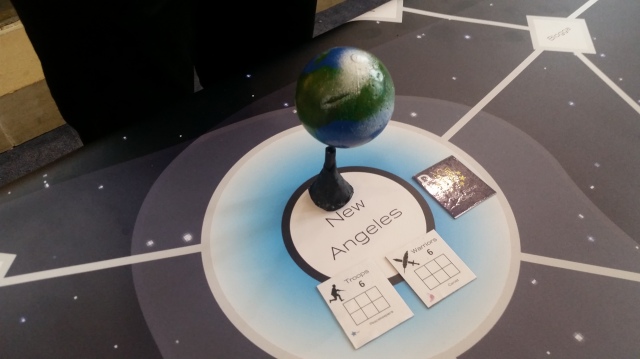 My role on the day of the game was being kept very busy running the espionage map on a side table. The board represented a mixture of physical and conceptual areas on each of the planets and the security agents moved around the nodal map conducting operations. It certainly through up some interesting situations in the game, the system worked fine but some of the values need reworking. One player did out manoeuvre the rest with skillful play- can’t remember the last time I had a player so successfully Machiavellian.

Some of the diecasts that I bought, and showed off in previous posts, weren’t in my first choice of colour scheme so I decided to do a quick repaint of them.

First up the WW2 SU76M- these went from a winter camo to a plain green. The crew figures are from Dixon and AB:

Then the camo’d BMPs and the BTR60PB that was in a parade ground scheme:

For both of these sets of models I applied two thinned coats of  Vallejo acryliic straight over the factory paint job then weathered as appropriate.

Then I decided to improved the BTR90s I bought:

I was happy with the camo scheme that they came with so I decided to just enchance it to stop it looking too flat. These three were given a coat of gloss varnish from a spray can before an all over wash of Army Painter soft tone (from the dropper bottles not the big tin) before a few details were painted in and they were weathered.

Over all I’m happy with how quickly they came together and the final result.

Ages ago I bought 4 toy trucks from one of the Pound shops in town; they bear an uncanny resembalance to the US M939 6 by 6 truck. I thoughht I’d do a recap of my earlier posts and bring things together. A few other gamers on forums I visit had also bought lots of them too- noticing like many cheap toy vehicles the wheels are the weakest part of the kit; this inspired Sand S models to do a replacement wheel set. I ordered enough replacement wheels for the trucks I had bought (at this point I wished I had bought considerably more of them) and propmtly stashed them in the shed a semi- forgot about them. Recently I was having a clear up in there and found the box again, so after several months delay I got round to making them up. A big inspiration in my project was this rather nice photo book: http://www.tankograd.com/cms/website.php?id=/en/index/publikationen/american_spezial/gun_trucks_irak.htm I can definately recommed it if you fancy trying something similar yourself.

The basic truck with the tilt removed and the replacement white metal wheels addded. 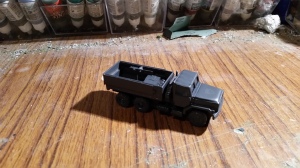 The gun truck was converted witha spare .50 cal Machine Gun I had in the spares box as well as pieces of plasticard to represent the add on armour plates.

The basic paint jobs. 3 were painted in NATO 3 colour camo, the last in a MERDC scheme (which according to my photo references could still be seen in Iraq in 2003).

The next post should see them finished…. Cheers, Pete.

I’ve finished the Land Rover conversion that I was working on. I’m rather pleased with it- though I’m unsure about how I painted the windows. I’m not sure whether they look too cartoon-y or not…? 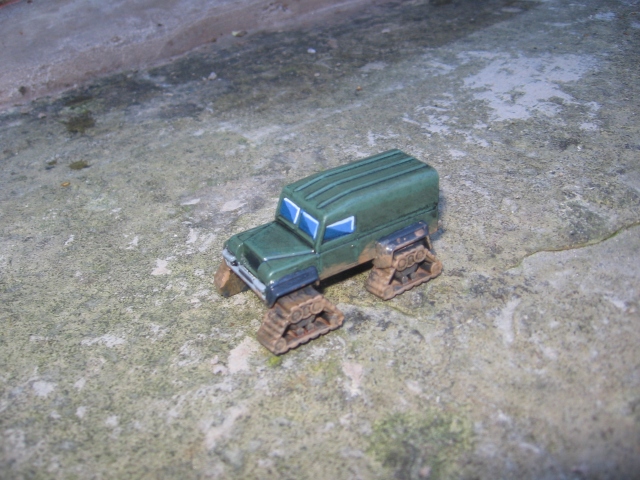 Still, it should look decent enough on the table top.

I’ve also finished the swamp sections. Not much to say about these really, just a combination of paint, varnish then flock/ static grass/ bristles for reeds/ flowery tufts in that order. 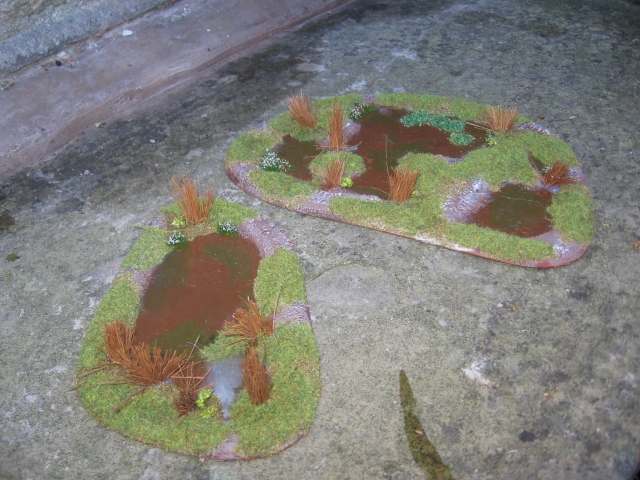 They are of a decent size so plenty of room to have Partisans hide in them in a Pripet based game… should make for an interesting scenario….

I have finished the converting of the JB/ Airfix Land Rover to a tracked version.

It is currently sat on my work bench under a coat of green paint but I’ll wait until it is finished before I photograph it again.

I learned a lot from doing the conversion and it has given me the motivation to do a few more. Though should I do another there are several things I would do differently. Mostly this concerns the track units: rather than glue them on separately I would make them up as axles then mount them to ensure better symmetry. The soft plastic that they were made out of took quite a lot of carving and gluing, I would have much preferred to have had all the parts made from polystyrene plastic but you can’t have everything….

Staying the the modelling theme I have decided to revamp all of my trees. If you look at any of my previous game photos you’ll notice them all mounted on large hexes. They had begun to look more than a little scratty by now and the limitations of the hexes was beginning to drag so I have gone for them all mounted on smaller bases. No pics of these as they are not very interesting. What is slightly more interesting (hopefully) is that I am redoing the swamp sections too, as they were also hex based. I invested in the plastic Kallistra offerings after I had been rather taken with their hills that I had got in the past. http://www.kallistra.co.uk/?page=14 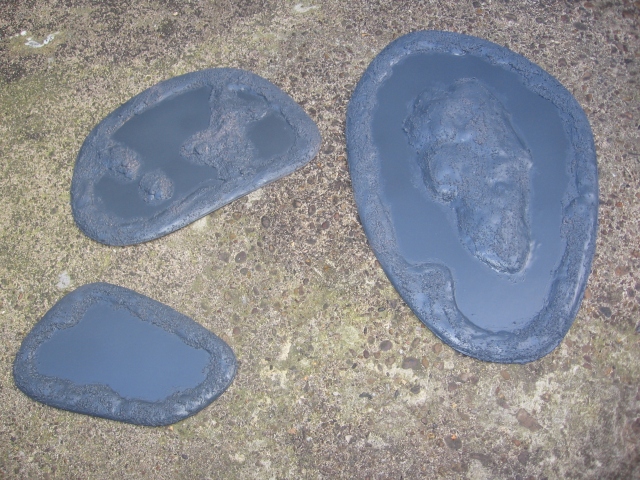 Here they are primed ready for paint, the picture doesn’t give any idea of scale but the smallest is slightly bigger than A5. I have added extra texture to them too. Again they’ll be photographed again once they have been completed.

My shed has been resembling a small scale back street garage recently (probably due to those Discovery Channel show I watch when insomnia strikes). I have chosen to make a tracked Land Rover.

It was inspired by a blog post by Mike over at the Bunker Talk blog who was showning off his latest diecast finds. I thought one looked perfect for a conversion I had in mind but had other wise dismissed as too awkward.

So the next time I went into town I had a poke about and bought myself one of these:

and one of these: 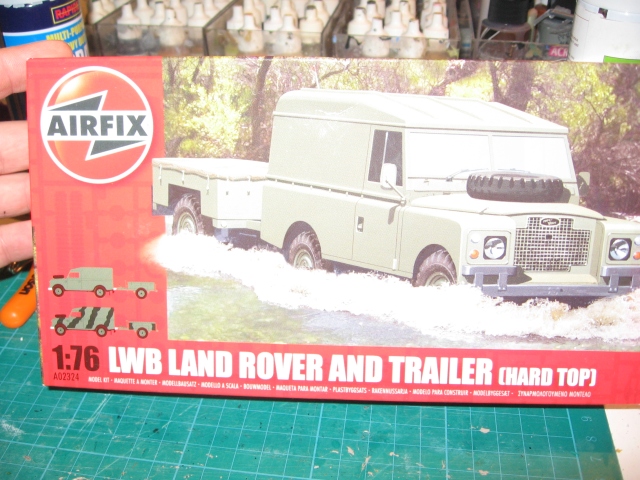 to make one of these:

The track assemblies aren’t perfect but close enough for me:

A bit of cutting freed the plastic parts:

and after a little trimming I was left with these:

The remained of the diecast was saved to be turned into part of a scrap heap. The next step will be to make up the plastic Land Rover but leave off the wheels then attempt to marry the two parts together.