My ill health sadly continues… will be looking at some different treatment options this month hopefully.

The 3d printer seems to have given up the ghost too… it had sat broken for a while until I had the time to try and repair it. I swapped out what I thought was the broken part but it still doesn’t work- although the part I did replace works OK. I’m not keen to chuick more money at it though. I’m pretty sure if I knew what I was doing with a multimeter and a soldering iron I could fix it, as I’m mostly sure it is a broken wire. The downside is that I’ve not used a multimeter since the mid 1990s and I don’t have the time with uni work to be messing with it too much. This does leave me wondering what to do with it now….?

Been getting the odd game in- Kill Team 2 and 40k against Nicola plus some interesting online stuff too. Hope to do a bit more.

…. that my posting as well as viewing/ commenting your blogs might be a bit sporadic over the next 2 months. Long story short- uni is going to get hectic as I prepare for my progression review. I will try to keep on top of thing though.

Firstly I like to apologise for not commenting on peoples’ blog over the fesative period. I’ve been away in Ashford with Nicola to see her family down there, consequently I was away from my PC so was just looking at things on my phone. It was a very nice and relaxing time. I caught up with some reading too which was good. I was surprised to find a MKIV tank in the town centre there as a memorial.

In all 2021 has been a bit of a mixed bag (something that I think can apply to almost everyone) health has been a bit low but uni has been going well, further more Nicola and I rescued a pair of cats that are wonderful company. With the opening up of things a little more here in the UK face to face gaming has made a welcome return, also I’ve started going back to the local club that is most enjoyable. A new Necromunda campaign did start up that I joined for a while but ultimately had to leave; a combination of poor health and the move of gaming nights to a weekend when I was usually busy meant I didn’t want to be unreliable so I decided it would be best to withdraw (I will do a post next week though on what I did do). I have been managing to get quite a bit of online gaming in too- whilst this has often been a live streamed table top game (covering many periods and scales) it has frequently included something a bit different. Having the oppertunity to play in varied role plays, committee games and matrix games has been great.

As for the coming year I’m still pretty much going to stick to the plan from November… I’m closing in on the last few bits of my Death Guard army for 40k, then it will be on to the Adeptus Mechanicus. Zona Alfa will feature more as I’m really enjoying that game- hopefully I’ll be able to get a campaign up and running. Not sure what to do about Necromunda… whether to rejoin in on the clubs next campaign or do something at home. Building a table for it could be good fun. My Winter War project has nearly been finished too, just got some bits to get and finish off then I’ll look to start getting that gamed. The rest of the stuff is bubbling along in the background.

With regards to board games, and here is the biggest overlap with my uni work, there are lots I’ve bought recently but not got to the table, including some print and play games I’ve got to make up. I’ve also got the itch to do some traditional RPG stuff. A few has been released recently, mainly Cyberpunk Red, that has triggered a wave of nostalgia, even though I have grave reservations about the whole format.

Finally, all that remains to do is thank you the reader for being with me for the past decade and more and wish all of you a Happy New Year and the very best for 2022.

Apologies for neglecting the blog of late. On top of my studying I’ve been a bit ill but started some new meds that should fix it. Basically I’ve got a vitamin D deficiency that has left me really tired all the time.

I’ve still be chipping away at my painting and have mostly been sticking to the plan I laid out some time ago. I’ll try to get one or two posts out a week to try and catch up and show you what I’ve done. It has mostly been 40k stuff as that is what I’ve been playing the most so it makes sense to keep doing that.

The past 2 months I’ve been a bit ill, not really ill just annoyingly so which has stopped me doing as much as I’ve liked… long story short I’m one of those people who, after a mild case of covid have developed the so called ‘long covid’ symptoms. What energy I have got is going on my uni work.

I’ve been keeping my hand in though working on bits and pieces here and there. I find the odd painting session does wonders for my mental health and lifts my mood.

Gaming has been all online bar one exception. Given the high rate of covid cases in my area we are currently under restrictions of not being able to mix in doors with people outside your bubble – good thing I’ve got a gamer (my mate not Nicola she counts as household) in mine. The rules are quite contradictory and hard to follow but you do what you can. The good thing is I’m getting 2 night’s gaming in a week with an online group that I’ve gamed with in the past when we could face to face.

I’ve been taking pictures of everything so I shall upload them as time permits so you can see what I’ve been working on. The printer is proving to be great fun, plenty printed out and I’m enjoying tweaking it and trying to get the best out of it with small scale prints.

I hope everyone is well and stays safe.

Thought I’d take this oppertunity, won’t get it again for 4 years, to do a little update.

Been really busy with a combination of illness and uni work. I have presented my first academic paper which went really well. Accordingly I’ve not had time to do any hobby based stuff, well at least not in terms of painting. Hence very little to show off on the blog. Most of my time is spent reading or on research. I’ve about 4 reams worth of printed out journal articles to go through- I’m just thankful that I’ve got a laser printer.

The promise of a Zone Alfa game on Monday has gotten me to pick up my paintbrush again so I should have something to show soon.

I’ve been getting a few games in here and there. A few board games and the next Necromunda campaign has just started so expect some battle reports soon.

I’m really enjoying the 3D printer- have it running most days while I try and get the hang of it and the settings. It is still seeming to be something of a dark art to me… I think I need to read up more on it.

That is all for now.

Being book obsessed I do like a good article on other people’s books, not what they wrote themselves necessarily but what they own(ed).

Therefore when I found this article I was all over it…:

Interesting stuff… plenty of leads to follopw up to get into the thinking of one of the more influential thinkers in military history.

Firstly a Happy New Year to everyone. Also I hope you all had a good xmas holiday. Mine was very relaxed down in Kent at my partner’s Mum’s… that has been my big improvement of 2019 getting a wonder new partner.

This xmas the generosity of my presents from friends and family has been very humbling and has really been heartwarming.

In terms of hobby stuff the big item was a PLA Anycube 3D printer. I’ll post pictures of it once I’ve assembled it. It is not something I want to rush. I’ve loads I’m planning to do with it – a SF corridor set first I think as my first big project maybe some other SF terrain to get me started…

I also got loads of 40k stuff- my Death Guard Kill Team will be raised up to full army level. Additionally I got the box set of Imperialis Aeronautica so watch out for that too.

The other big thing for me in 2020 is that I’ll be starting my PhD- plan ‘D’ worked out so come March I’ll be at studying under Bath Spa University looking into Asymmetric warfare simulation models and their use in military training. Yup, a PhD in wargames. I’m really looking forward to it- I’m sure it will be lots of hardwork and some difficult times too though. Again watch this space as the game side of things will be blogged here too. 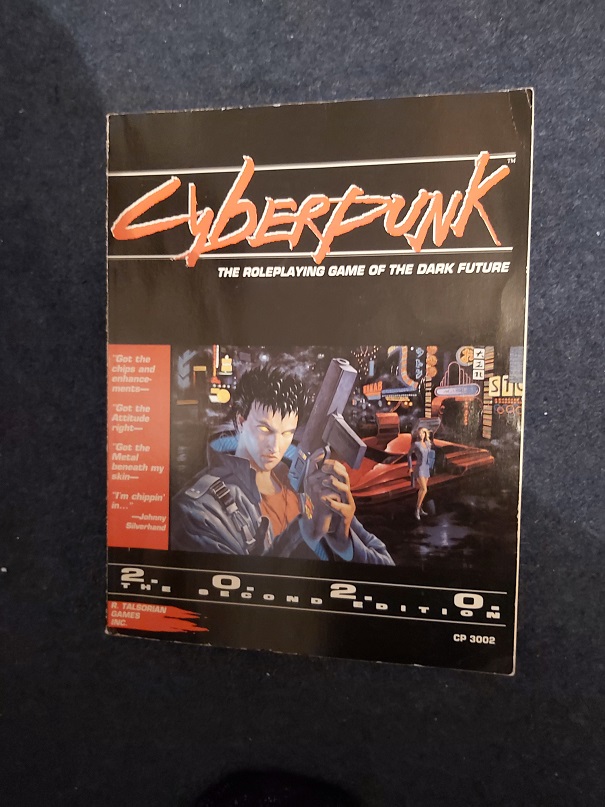 Where has all the time gone? It didn’t seem that long ago I would roleplay this every week in my early teens in the 90s….

My WordPress app informed me today that it is my 8th year of running this blog so I thought it would be a suitable time for an update as things have been a bit quite round here.

Firstly I’m in a new relationship with a wonderful lady, a gamer too. Secondly it looks like PhD plan ‘D’ is coming to fruition (I don’t want to jinx anyything yet by giving out more details), more on that later hopefully.

I’ve been getting a bit of gaming in that will be featured on the blog in due course. Both my GF and I have really got into GW’s Kill Team recently, my adventures in 6mm continue and I managed to play a megagame this year after missing two in a row due to illness. The Necromunda campaign is continuing but I’ve got behind on my game write ups. All a case of watch this space.

I’ve just got back from a rather good day’s gaming in Sheffield (I’ll blog on the two games I played later on) but whilst I was there I was made aware of this video:

Scary stuff in a way and it is terrible that his family’s health has suffered too.

Nonetheless it gotr me thinking about how open people are about their hobby. I know that in recent years ‘geek culture’ for want on a better term has increased in prominance and exceptance but it is still not something that I readily volunteer that much… Through my misspent 20s I still gamed but I hardly told anyone; I figured that very few people I met through my DJ-ing and writing in the goth/ industrial/ experimental scene would care and anyway other things could be discussed. Now that I have stepped back from that and most of my social circle consists of gamers I am obviously far more open about it. It did get me wondering how everyone else felt about it?