Following on from my post on VDV Air Assault Brigades I’ve done some light armour to give them some support. 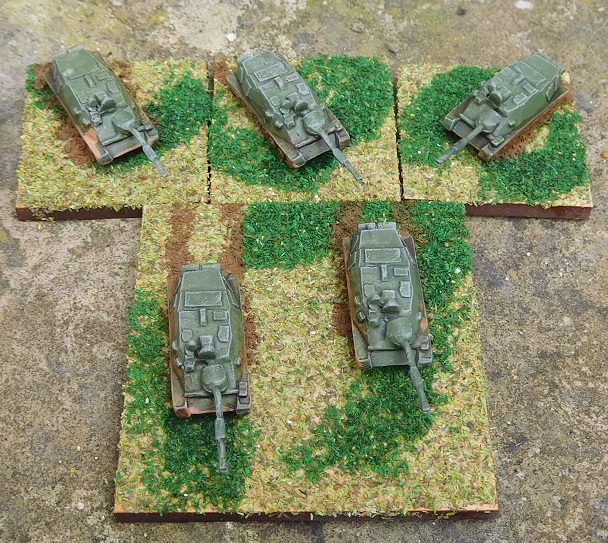 First up we have the ASU85: a light self propelled gun on the PT76 chassis, designed to give the VDV some anti- tank support. It was a replacement for the much earlier ASU57. At the time of its introduction its 85mm gun (based on the WW2 tank gun) was barely adequate for the task by the 1980s when it was still in service it would have been useless at its intended role. Still any soft skins or light armoured cars would be vulnerable to its gun.

Next we have the little known 2S25 Sprut SD, the replacement to the ASU85. Mounting the usual Russian 125mm smoothbore gun it can fire all the same ammo as an MBT but from a lightly armoured chassis based on the BMD3. Given the ammo types it can fire it makes up a pretty potent support vehicle for the modern day VDV.

Although not an airborne vehicle I painted up a few PT76 amphibious tanks. Developed after WW2 as a recce vehicle it is fully amphibious, accordingly it means it is not very well armed or armoured. Kept in service untill surprisingly recently in has seen combat in the Middle East, Vietnam, India, Africa and even Chechnya.

During the Cold War the Soviet Union raised extensive parachute forces: the Vozdushno-Desantnya Voyska (VDV). Whilst the Airborne Division were under the command of high level HQs and would have been used for strategic and operational missions their smaller cousins the Air Assault Brigades were under the command of the Ground Forces so would get more tactical missions to undertake; because of this I thought they’d be an interesting force to field in our 6mm games of Nordic Weasel’s 5core: Brigade Commander.

One of the things that would have hampered the Soviet Union’s deployment of its VDV was the lack of sufficient lift capacity, especially at the strategic/ operational level. At the tactical level insertion by helicopter would have been more common but even so the number of heavy- lift helicopters to move vehicles was limited. The non- mechanised companies could be para dropped of they could be flown in by helicopter. The engineers in the brigade were trained to make landing strips for aircraft out of West German roads (doubtless these would have been recce’d in advance) to bring in heavier vehicles. 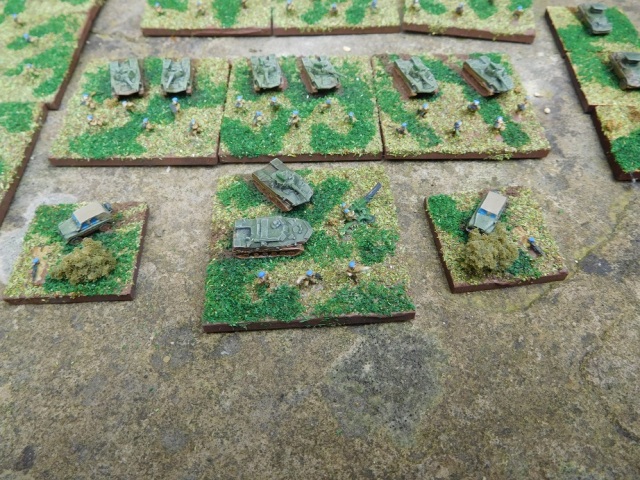 The HQ company stand, three Heavy Companies and two recce  attachments in close up. All vehicles and figures are from Heroics and Ros.

Below is my interpretation of the brigade. Sources differ as to whether there are 2 Heavy battalions or one either way there are four battalions.

AT company, BRDM3- can be fielded as 3 AT attachments.

2 or 3 Air Assault Battalions:3 companies of Infantry (limited AT).

For my collection I’ve got far more attachments than I actually need, this is primarily to have some variation in what I can field.

Three SO120 mortars (a breech loading 120mm mortar on the BMD APC chassis).

The BRDM based ATGMs which act as the anti- tank attachments.

I’ve come up with a couple of scenarios to use with the unit that reflect the sort of tactical missions they’d have been given. The first is a landing to capture a bridge and then hold it against a counter attack until relieved, the second is to attack into NATO rear areas to take out a HQ. I’ll post some game reports when I’ve played them.

I may yet expand my collection to be able to field a regiment from a fully fledged Airborne Division later on.

As much as I’ve been busy beavering away in the shed making kits and painting I have been getting quite a few games in too. I’ve not done a battle report in a while for the simple reason that trying to take photos at meaningful points in the game comes third to a) playing the game and b) having a laugh with my mates, the latter is the best reason for gaming imo.

Nonetheless I have taken some ‘happy snaps’ as it were of a few recents evening’s gaming so thought I’d put them up here:

First up we have the old Milton Bradley game Battlemasters from 1992. Done in conjunction with Games Workshop as an entry level game it comes with a rather nice printed plastic mat. 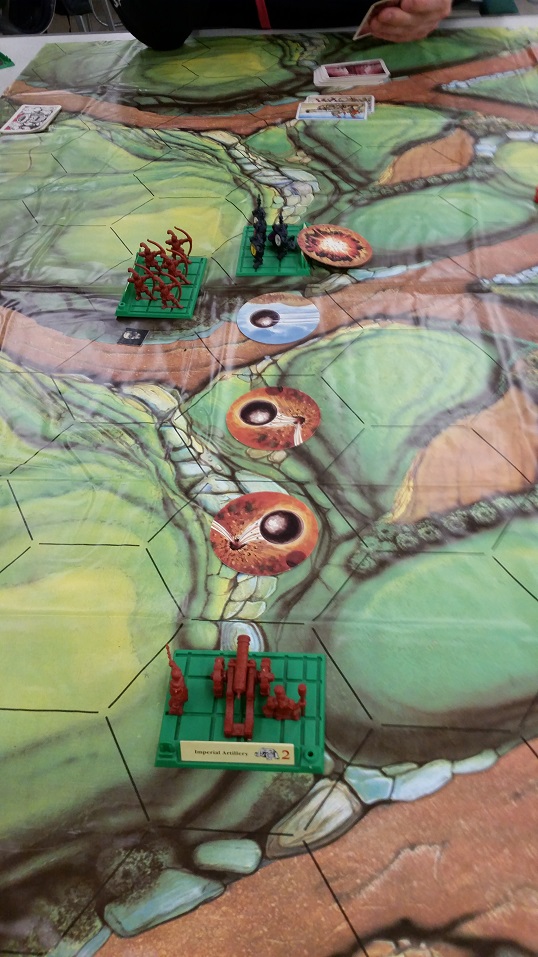 Paul had found a cheap copy in a charity shop so he took it up to the games club and gave it a run through that evening. It plays quick so we managed to get two full games in. The above photo gives you some idea of how the random card cannon mechanisms works.

The second scenario saw the ‘evil/ chaos’ army attempting to force a river crossing to take out a fortified tower. It seemed to be a quite a tall order for them to do that given that the ‘Empire’ army was at full strength. 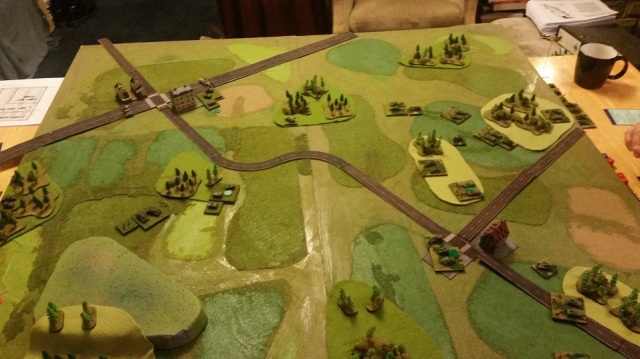 I ran a nice little 6mm 5core: Brigade Commander game for Evan and Bill that saw Bill’s 1980s British defend a section of the German countryside from Evan attacking Soviets. You can’t beat a bit of 1980s Cold War what if? gaming to stir nostalgic memories of the 1980s. I really should get a CD of 80s music to go with these games.

The twist in the scenario was that the Soviets faced a large flanking counter attack that they weren’t ecpecting. Here Evan tries to reposition his troops in the face of approaching British armour.

Here a MIG 23 from the VVS tries to halt the encroaching Chieftans threatening to overrun the Soviet HQ. The game ended in a bloody draw. 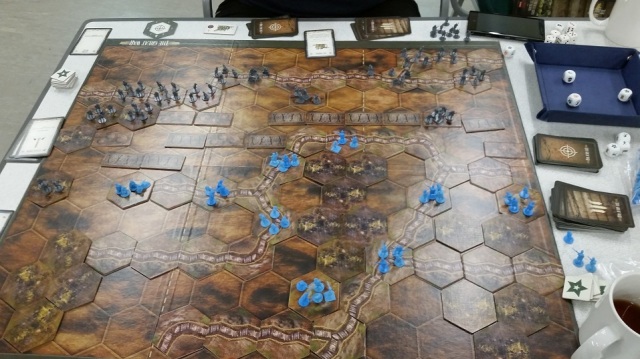 I have managed to get a couple of games of the French expansion of The Great War board game. The op[ening games are based around the battles for Verdun. The first game seemed a tough ask for the defending French. I played the game twice in an evening with Paul swopping side: on both occasions the French were decisively beaten. 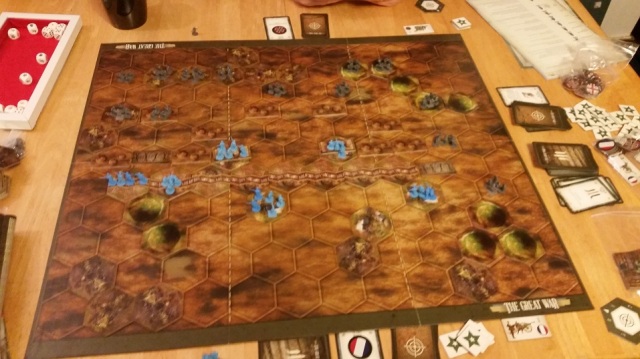 I played the second of the new scenarios with Evan. Again we played it twice, again the French were beaten both times. Evan played as the Germans the first time. Veteran gamer that he is he quickly indentified the the weakpoint in my defences and went for it winning comfortably. After we swopped sides I looked at the board and couldn’t come up with a better plan so copied his shamelessly for much the same result.

I dug out my modest fleets of Russo- Japanese War ships for a naval battle with Paul. We could have probably done with a bigger table as this turned out to be the naval equivalent of a knife fight in a telephone box.

Here Paul’s Russian battleship is trying to ram my battleship squadron, having crossed his ‘T’ I gave him little option. Fortunately he bounced off my side armour and a lucky critical hit roll sunk him. A fun game, I need to add to my collection though before I can play the war as a campaign as I intend to do at some point.

Finally with have the recent Too Fat Lardies’ tank skirmish ruleset What a Tanker. Evan ran the game for Bill and I, I had three BT7s and a T28 facing off against a STUGIII, Pz38t and a PzII. After a lot of to-ing and fro-ing around the table Bill whittled me down for the win. I’ve mixed views on the game (I think the games set in the early war don’t work, for boring mathematical reason, due to the game design) but that aside it was one of the most enjoyable evening gaming I had had in a long time.

Growing up, as I did, at the tail end of the Cold War one of RPGs that really drew me in was Twilight 2000; a game that I’m sure most of you are familiar with too. I never played many games of it: the combination of modern weaponary and 19th century medical care meant that and wounded characters didn’t last that long… I keep thinking of returning to it but as a battling warlord skirmish campaign type thing rather than a straight RPG. Nonetheless in the meantime I keep collecting bits for it as and when, in fact my earliest modern figures started of being collected for Twilight 2000.

Elhiem Figures have released a very nice set of mounted (ex)soldiers suitable for the game. Even better, due to the modular design of the figures you can have the same figure mounted and dismounted.

To give them a ragtag look I mixed in bits on non- camouflaged clothing. They have a nice mix of weaponary too. I think it would be worth making them up as a special group of NPCs for the player characters to encounter if you were running a campaign.

First up with have a guy in a black T-shirt carrying a shotgun.

Next we have a guy in the earlier M1 helmet talking on the radio.

Man waving pistol about- there is a slung rifle on his horse.

One man carrying M16 and binoculars- probably my favourite one.

Bareheaded with an M16.M203 combination. 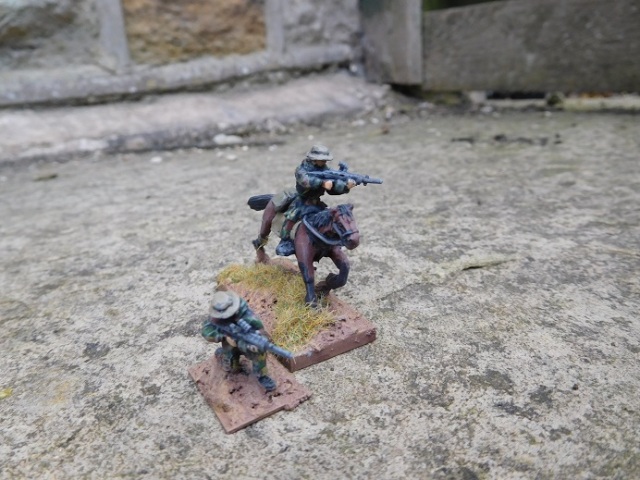 The horses have the legs of the riders suclpted on them- the torso fits in with a plug, a sperate set of legs are available for the dismounted figures so you can mix and match until you are happy with poses. It is nice to have this much flexibility when putting together the minis. If some more were to be released but with Soviet/ Russian weaponary I’d be very happy as they’d complement this set immensely.

Given the quality job Pix Art Printing clicky did with the game maps for my recent Case Blue megagame I decide that I put some more business their way. Several years ago I bought a few game maps from Wargames Vault clicky with the intention of printing them out onto paper and assembling them as a jigsaw. This didn’t work so well for various reason… but now there is Pix Art I decided to send them there to be printed. Using MS Publisher I added all the images together into one massive file and then waited for a special offer to be on to maximise my savings. 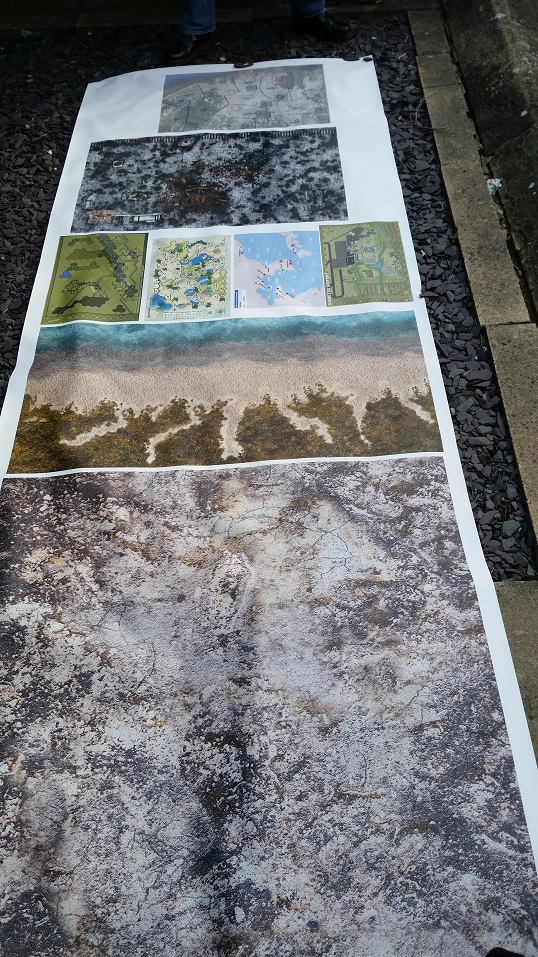 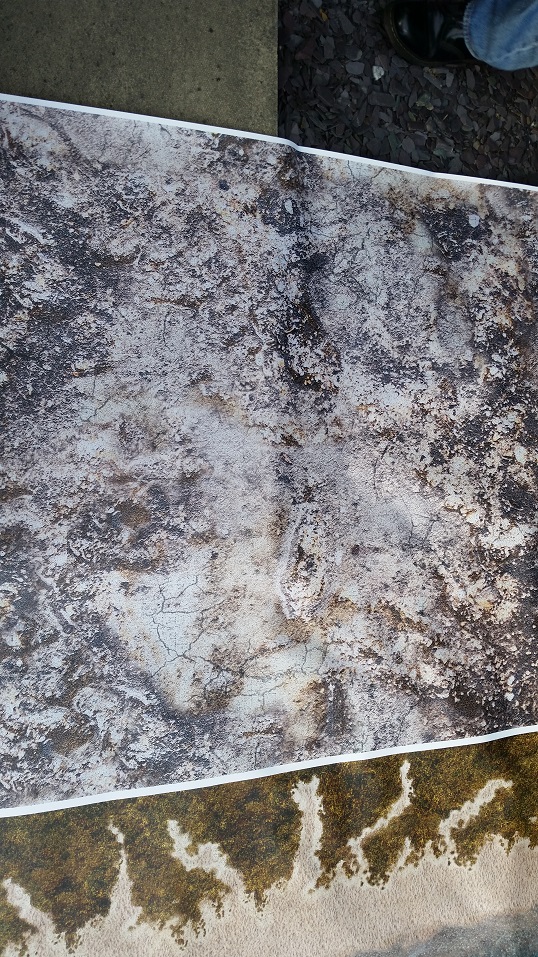 I got a 120cm square wasteland mat that will be ideal for any game set in the Middle East/ North Africa, as a point of comparison the going rate for a comparable sized mat by itself seems to be about £25.

This 120cm by 60cm costal strip will be great for ampibious landing be it in WW2 or the Dark Ages, the textures should work for both 20 and 28mm sized figures. 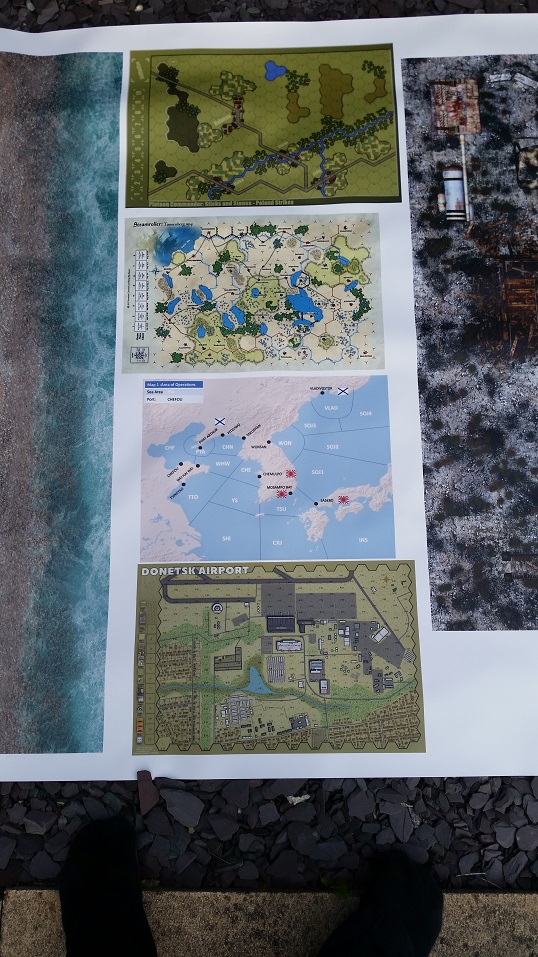 I added a few maps from my Print and Play board game collection- here we have maps for the Russo- Japanese War, WW1, fictional WW3 and right up to date with the War in Donbass.

A slightly smaller urban mat- should be useful for some of the 40K figures I’ve painting recently. 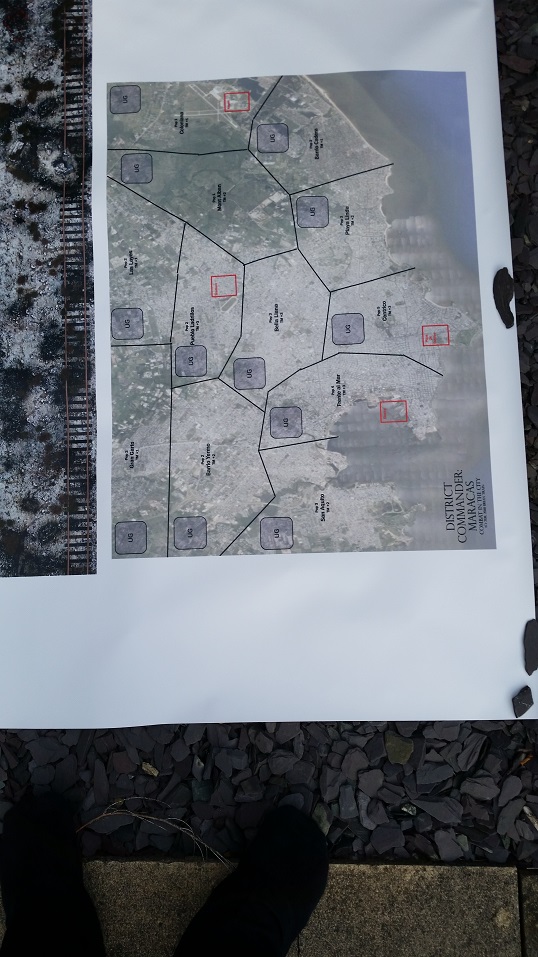 Finally I printed the map for use in Brian Train’s free urban COIN game: Maracas clicky

All in all I’m really pleased with this. They should last for ages and as they are easy to roll storage isn’t a problem either.