I wanted to paint up some Stalkers in a specific camo pattern, namely the Russian ‘Partizan’ scheme… that was all the excuse I needed to get a set from Pig Iron Productions that I had been coverting.

Here they are again in threes. I went for a sniper rifle a light machine gun and three AK style assault rifle, the dog is so I can try out some of the optional rules I got from facebook.

I also had a few more Cold War figures from Under Fire Miniatures that I converted- again using Pig Iron parts.

You may have noticed that I didn’t take these pictures outside on my backdoor step… I got a light box for xmas and this has made taking the photos much easier, especially in these wetter and darker months. I did print out a stone texture picture from google to use as a backdrop which I think works quite well.

Following on from my recent Zona Alfa interest I’ve finished up a small batch of the Eureka Miniatures NBC Soviets. They are great figures, only slightly smaller than the Under Fire ones I’ve been using, they are a good fit with the Copplestone ones though.

I’ll be getting enough later on for at least a full squad and possibly the AAHMG too as it looks a good set. Eureka Miniatures can be bought in the UK from here.

I tend to work better to a deadline so was more than happy to run a game of Zona Alfa for friends with a week’s notice, even though I still had nearly 30 models to paint in that time. Firstly I needed to finish off the various zone hostiles that I had collected, these are the various monster/ fauna that inhabit the zone and make life difficult for the players. I had a mix of zombies from Mantic, Copplestone and Pig Iron. All were painted in a similar muted palette and complement each other. The Mantic and Copplestone ones go well together as they look like the reanimated corpses of previous expiditions to the zone….

I also had a small selection of Reaper Bones models to represent the mutants, both large and standard size, that can also appear in the game. Nicola very kindly painted these three for me.

I also wanted to round out my collection of military types witha few more figures. I got some of the Under Fire Miniatures cold war camo suited Soviets and added Pig Iron Productions gas mask heads and backpacks to give them more of a STALKER vibe. Whilst the hardness of the metal that both companies used made drilling them tough on the fingers I’m really pleased with how they turned out.

For the game at the club I wrote a brief intro to the game (which I can post if people want) and made up four forces for the players to use: two military, one scientist and one bandit. After a quick run through of the rules they teams set off to revover the protyped weapon left cached by a previous expedition into the zone. I purposely ignored the Allies and Enemies rules for this game, mainly as it was a one off zero sum mission it would added more combat to get the players better used to the rules.

Set in a level one zone I placed the two hot spots so that the players would be able to interact with at least one lot of zone hostiles each.

In the end the Scientist and the Military player ended up trading shots and finding out how bloody the combat syestem can be whilst the Bandits crept forward clearining a hotspot and then cunningly used electric juice to speed forward to snatch the mission objective, after the Military team had dispatched the rats it had spawned the previous turn. The scientist cleared the hotspot closesst to them, again hiding a rat swarm before finding an anomily there and getting a rare artifact. At the point the Bandits were attracting a lot of attention so began to take a lot of fire as the other two teams attempted to snatch the weapon for themselves… at the expense of most of their team they did manage to get it off the table. However, I did point out to the players that in a campaign game they’d need to watch their casualties more and that finding a rare artifact could mean that whilst you don’t win the game the money it earns your team may be more beneficial in the long run.

The game went down really well and there are a couple more players who wish to try it so hopefully there will be enough interest to get a campaign going. I’m sure I did some of the rules wrong but it has been a long time since I ran the game, pre COVID19 infact. As always I enjoy running the game and seeing how the players interact as much as I do playing.

I picked up a further four of these monopose plastic models from ebay. Given that the game that they are from is out of production they are getting a little bit more expensive and rarer so I decided to get them sooner rather than later.

I painted then to match the previous pair that I did- I used a mixture of GW’s Nihlak Oxide and some homemade glazes so they were a really quick job.

I plan to mostly use them as mutant for my Zona Alfa games but they’ve already been on the gaming table in Nicola’s Drukhari force.

I previously posted a couple of examples of the Zuk van that I printed out in 20mm, this time I simply rescalled the 3D model file and reprinted them to match my 28mm models. As you have probably guessed these are heading into my Zone Alpha terrain collection.

I did one van a military green colour whilst the other is more beat up with different coloured doors and more rust.

The bit of scatter terrain is also 3D printed and should make a nice bit of setting for a bandit camp.

It should be no secret that one of my favourite sculptor is Mark Copplestone; his future War range for Grenadier in the early 90s made a big impression on me. Since then he has gone back to his SF figures and it has been nice to finally get some paint on some of them.

These 10 figures are billed as ‘Partisans’ and are available here.

The ten of them come with four different gun types, two variations of assault rifles, an LMG and a SMG. Given their Russian/ Soviet stylings I painted them in a mix of green, khaki and Russian camo. As such they’ll be making an appearance in my Zone Afla games quite often. They are probably a bit too military to be fitted into neon drenched cyberpunk streets but I’ve my eye on some other models to fulfil those needs.

I rush painted these for the Zone Alfa game that I featured in my last blog post.

The NBC troops are, of cource, early Copplestone sculpts (still available from Moonraker minitaures) . I can’t say enough nice things about this range…. 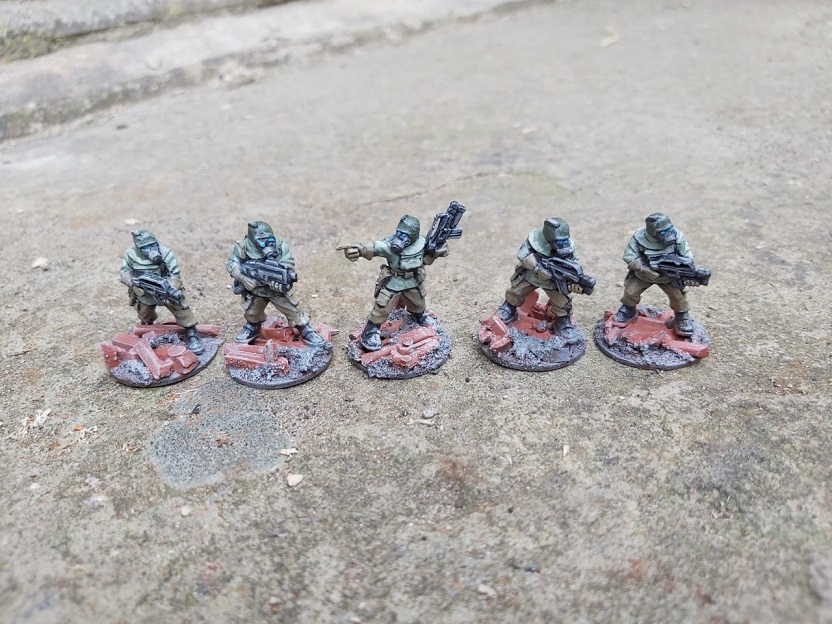 The Ur Ghouls and Spindle drones are from the Blackstone Fortress exapansion pack that I picked up.

They should be useful for lots of different things. The Ur Ghouls (the blue ones) were to  stand in as mutants in Zone Alfa.

Been rather busy recently with uni work so not had much time to do as much hobby stuff but I know where my priorities lie. As such I’ve not bneen gaming much. There was a brief window where people from 2 different households could meet inside before my  area was subject to a localised lockdown… in that gap I managed to get a small game of Zone Alfa (Osprey Games) in with Joe. I painted up some more minis for it which I’ll put up soon.

We had planned to get a Zone Alfa campaign up and running at the club, but Covid put paid to that. I had, however, started to get a few bits and pieces for it in 28mm so that is the scale I played against Joe with. I know I was planning to do 20mm Zone Alfa at home, and I still am, but we were being sensible and socially distanced; so we only touched our own toys, tape measures and dice and so on. 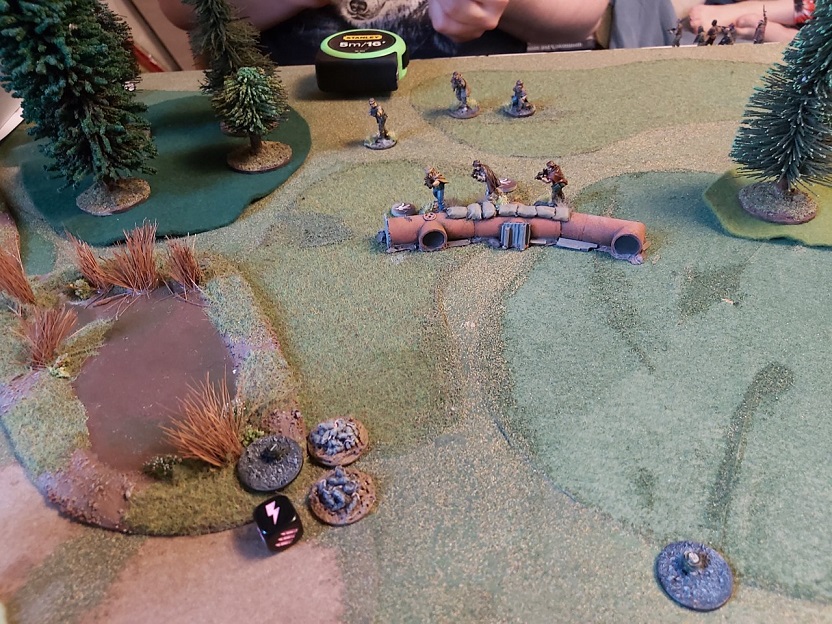 My previous game of Zone Alfa degenerated into a rather bloody gun fight as the factions we both played were mutally atagonistic. This time as we both ran military teams so were cautiously allied. We could have rolled to shoot at each other but neither of us decided to.

In the end this worked in our favour as it was a good refresher on how the exploration,  anomalies and zone hostiles worked.

We weren’t using the game as part of a campaign- where Zone Alfa shines- more as a rules refresher. I think in the end Joe’s forces would have looted more stuff than me but I’d have got mnore experience for my team as I killed more. 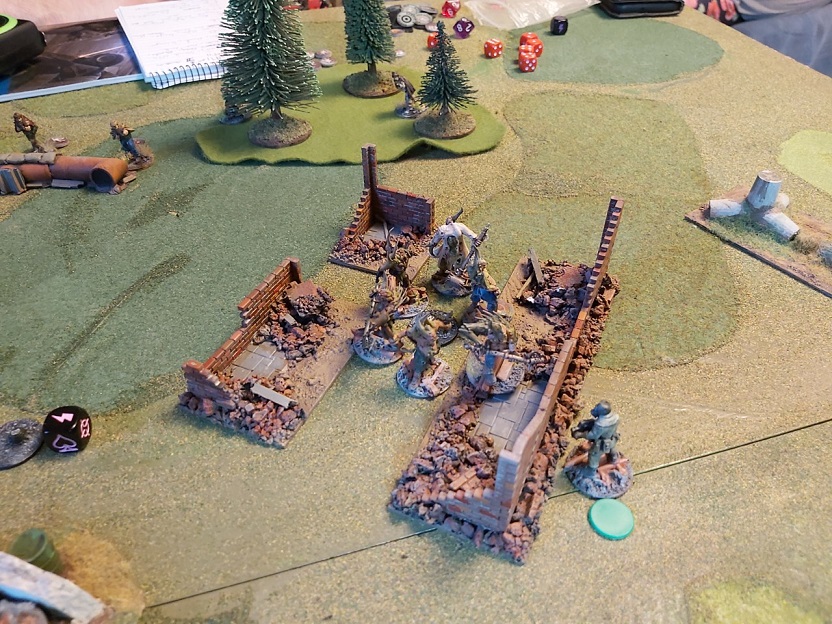 It was really good to get to roll some dice again and get new figures on the table. Shame that the new lockdown has already got in the way of 2 games that I had planned. It was also nice to have some of my 3D printed terrain on the table too. Hopefully I won’t have to wait too long until my next game now.

Another quick post today. Been working on more bits of scatter terrain which will probably end up being mostly used for Zone Alfa. They are enjoable to paint and are ‘quick wins’ in terms of getting things finished. All of these bits were printed on my 3D printer. 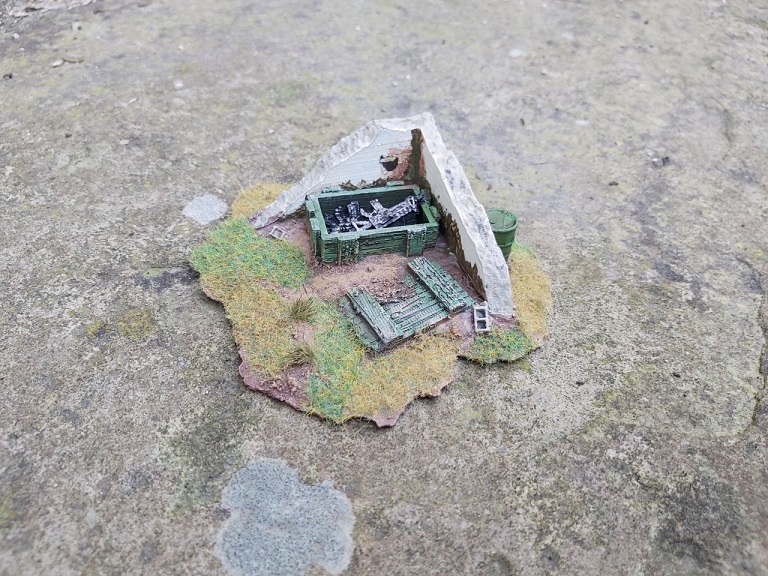 First up we have an ammo cache… abandoned some where in the Zone it will make a nice objective marker. 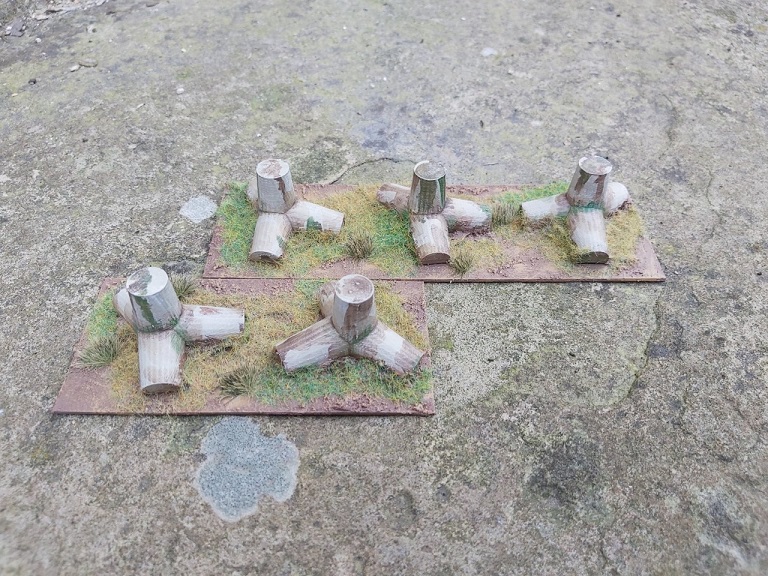 I printed out some more of the tank traps too but this time I based them up and made them a little more over grown. It should make for a bit of  hard cover in the game.

One of the monster types that can spawn in a game of Zone Alfa is swarms of creatures. I didn’t have any in my collection and thought that they might be tricky to scratch build so I bought a few from the Reaper Bones collection.

4 bases of rats, and 2 each of spiders and beetles should be enough for my purposes. They were fun and quick to do too. The Reaper Bones models are made of a funny plastic but they took (brush on) paint well. I’ll be getting some more of them.