Taking inspiration from the classic old board game of the same name (which I still haven’t played yet) Paul put on this megagame in Manchester on the 24th November. The scenario was expanded beyond the premise of the board game to have players taking on the role of the ruling politicos/ families of four fictional 1960/ 1970s South American countries, all of which were centred around the Anaconda basin. Also, there were players representing various multinational corporations trying to exploit the countries natural resources; four 2- person ambassador teams from the major powers (USA/ UK/ France/ USSR), five single player roles were given over to intelligence operators (all with bland names starting with ‘J’) and finally there were two players taking the roles of writers floating about looking for the story of the century. These final two roles were based on Ernest Hemmingway and Paul Theroux. 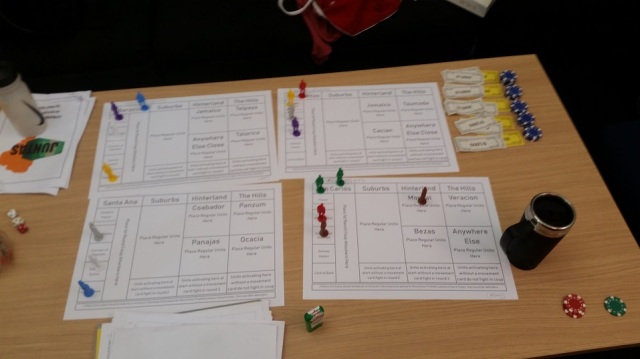 The network figures on the abstracted board.

My job on the day was to run the intelligence game, something that I always enjoy doing. The game was a mixture of open and closed maps. There was a map that everyone could see that showed the info that everyone would know but a large amount of the info about the actual state of a country was kept hidden by control. This design philosophy was reflected in the intelligence game. The players had an abstracted map of the area upon which coloured figures were moved that represented local and transnational networks that could be hired to do the intelligence officers bidding. Whilst the players could negotiate and talk to other players in the game pretty freely the only way that they could mechanically interact with the game was through the networks. The hidden information came from the fact that they invested money into each network and only I as intelligence control knew who had invested what and who had ultimate control of each network. The five players were all experienced megagamers and kept me busy all day with some excellent ideas. Of the five roles four were American, and the final one was Soviet. Three of the US players worked quite closely together whilst John, playing a National Security Agency player, acted to type and kept a distance. Daniel as the Soviet was up against it from the start as the others instantly were suspicious of him, furthermore he invested heavily in the worst network in the game meaning that their loyalty to him was only matched by their incompetence in the field. Networks could be tested to see how good they were but that was not really done by many of the players.

A general view of the hall with the screened off umpires’ section, the open map (bottom right) and the country tables round the edge of the room.

I could tell from turn one that I was going to be in for a busy game as Matt had been planning on the train down to the game, as he told me after the game’s conclusion, for his opening gambit. He wanted to buy a large quantity of heroin to have it at hand to potentially use to destabilise any of the four played countries if it looked like that they were going to move towards socialism/ communism… very CIA. His networks spent a few early turns locating and the purchasing said drugs. Ed was seemingly unhappy with his budget allocation and rather than deal with the paperwork to increase it (which was an in- game option) decided to raise his own slush fund by having his network rob some banks for him. This did wind up the counties no end as it got docked out of their budgets, as Ed’s networks were pretty good he never had an agent captured that might’ve given him away. A couple did go out in a hail of gunshots on the steps of a bank. 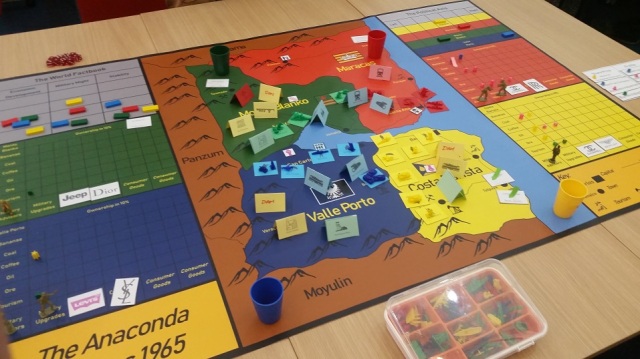 The common knowledge map of the Anaconda basin.

Within the structure of the turn I was busy all the time as I needed to keep my paperwork regarding the networks up to date, thanks are due here to Becky W for helping my out with  cash counting duities. Collate the pieces of information that the intel players were asking for, resolve any other actions then relaying any pertinent info to the relevant country controls. As such I didn’t see much of the game other than that which was through the spy’s lens. John played the slow and steady game, sticking to his brief by infiltrating and bugging each countries’ radio network. This was spotted by the other three American intel players and they did try to spy on John to find out his loyalties. I just told them that they didn’t have a high enough security clearance to have the answer. At this stage of the cold war even the acronym ‘NSA’ was classified, hence its occasional nickname of ‘No Such Agency’.

A glimpse behind the umpire’s screen where the countries’ actual data was tracked.

Daniels lowly network was nothing but not persistent taking several turns to finally blow up a dam as an act of economic warfare. As he was about to be hunted down to the others as the game drew to a close Daniel did the sensible thing and negotiated for himself a French passport. The heroin did make its way into the game as it was infiltrated, by the troika of US players when a country went over to communism, into a player’s food to make him unwell when it was withdrawn to limit his efficiency. It may have sounded far- fetched but one only has to remember the CIA plots against Cuba’s Castro during this time frame.

All in all it was a busy but very fun day and another solid political- military game by Paul to finish off Pennine Megagames 2018 calendar. The only thing that I would think about changing from my corner of the game would be to have an intel player tied to each ambassador team as it was difficult for the USSR player to do much and the US got a bigger advantage than the others as there were four players supporting that side.