I’ve painted up some example of Elhiem’s [clicky] work that I’ll share with you. One of the good things about Matt the guy behind Elhiem is that he is very responsive to customer requestsd and suggestions, he has a Facebook page just for to post ideas to. The first group of figures is one that I said I’d be interested in when the idea was broached an a now defunct forum. 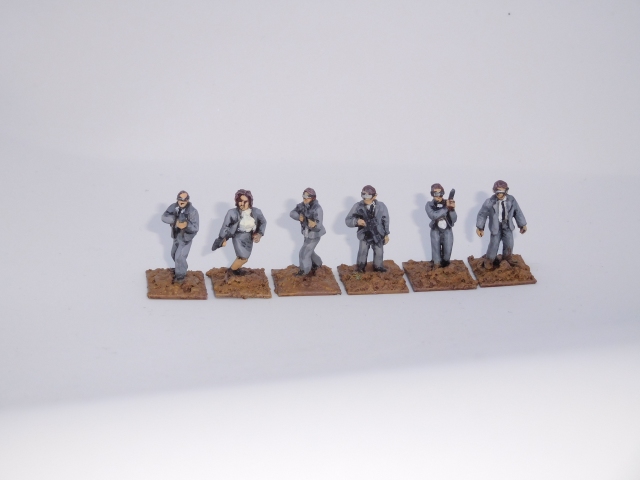 This are men and women in suits, ideal as bodyguards for some VIP. I painted their clothing a fairly light grey to contrast with the dark weapons; unfortunately the silver paint for the mirrorshades didn’t worth that well, I may yet got back over it with black….

This next group is 12 near future/  SF Amerrican types. Wearing full face helmets and advanced armour, they have exo- skeletons to give them a boost. It is a nice touch that only the LMG gunners have the exo- skeleton extending down their arms.

To distinguish the different fireteams I painted each group of four’s guns different colours: here we have the ‘greens’… 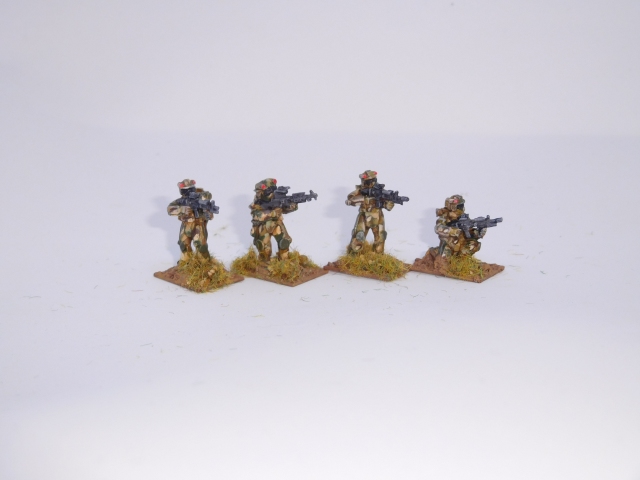 There are some suggested rules for near future tech in the recent Osprey rules Black Ops so I will dig those out to. Also revisiting the novel Ghost Fleet should provide some inspiration for games.  I found this video too that gives me some ideas. I’ve got 12 near future Russians too to paint up so they’ll have some potential opposition. 20mm science fiction figures are rather thin on the ground so these area nice addition. I wouldn’t mind some more poses for both ranges, Officer and NCO types would be useful as well as some with rocket launchers of some kind….

2 comments on “Some Elhiem figures.”